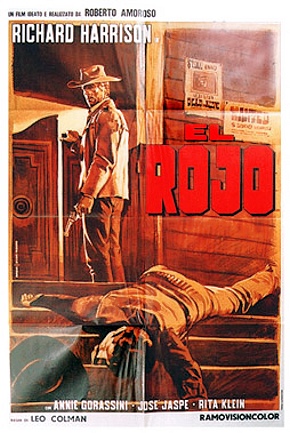 Donald Sorenson, back from the war, with the help of various allies, is on the trail of those responsible for the murder of his family, who were massacred by an apparent Indian attack while on their way west.

OK western which begins pretty bad with an awfully directed "Indian" attack on a settler family. The revenge story is predictable until a bizarre looking gunman with an iron mask appears, who also helps to provide a not expected strange ending. / by Stanton

Retrieved from "https://www.spaghetti-western.net/index.php?title=Rojo,_El&oldid=140489"
Categories:
Cookies help us deliver our services. By using our services, you agree to our use of cookies.