Mario Bava will be remembered for his gialli and horror movies, not for his spaghetti westerns. Roy Colt and Winchester Jack is his third and final western. The first two, The Road to Fort Alamo and Ringo from Nebraska, had been fairly conventional western movies, Roy Colt and Winchester Jack is definitely out of the ordinary. In an interview Bava declared that the movie was supposed to be a serious spaghetti western in the style of Leone, but that he himself had taken the decision to turn it into a spoof.

The film opens with a protracted fist fight. Two men, Roy and Jack, are fighting for the leadership of their gang. They exchange enough blows to knock out a couple of rhinos, but both men refuse to go (or stay) down. Finally Roy has enough of it, and declares his friend and opponent Jack the winner. He is appointed sheriff in a small town after he has saved the life of a handicapped banker called Samuel. In the meantime Jack has saved the life of an Indian confidence trickster called Manila, who first strips him of his clothes, then of his money. When a third bandit, Reverend, a Russian priest turned bandit, finds out that the banker is in possession of a treasure map, he teams up with Jack to steal the map. Roy, Jack, Manila and the Reverend end up in a typical treasure hunt spaghetti western style, full of double-crosses and changing alliances.

Due to the fact that the script was written for a spaghetti of the diehard kind, the body count is pretty high for a comedy western. The comedy Brava brought into it, is occasionally quite unconventional. Some jokes, like the spastic gunman, are plain stupid, others are clever, but not very funny. A good example is a scene set in a bawdy-house, in which the well-known attraction of watching a nude woman's silhouette on a paper screen turns out to be a hoax, produced by an old man wearing a cardboard cut-out. It’s the kind of joke that would be more at home in a Monty Python movie, with Terry Jones performing the hoax and Michael Palin commenting it. With plastic cactuses, cardboard mountains and some Arizona rock formations of papier-mâché, the atmosphere created is ultra-weird and deliberately artificial, as if we’re watching a spoof of a spoof. 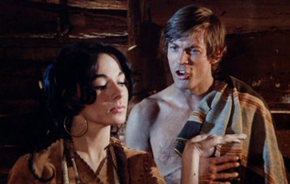 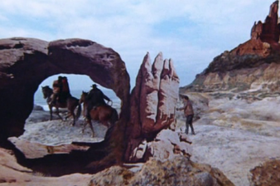 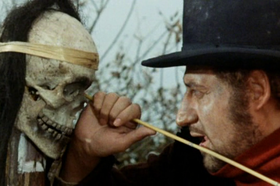 The two lead actors are okay, but neither of them ignites real comedy sparks and the movie definitely belongs to the supporting actors. Corrà successfully hams it up as the Russian villain called Reverend (he spent twenty years in the seminary!); his Italian is quite funny. Tolo is a special delight as the sexy and cunning Manila who is determined to find herself a husband and combining business with pleasure by asking money for every possible service. Some people noticed that she used band-aids on her nipples in one scene, apparently to ‘avoid’ full-frontal nudity (1). Some of the jokes only work in Italian. When Jack, who has promised to marry her, finds her in the arms of Roy, a cactus forms a pair of horns behind his head. In other words: he is horned, in Italian “cornuto”, a cuckold husband. Far from great, the movie is helped a little by this classic storyline of the treasure hunt, which sort of coordinates things. In the last twenty minutes, with everybody trying to outsmart everybody, even some suspense is generated. Some of the 'genuine Bava' shines through in this part, with a few horror visuals (look at the third screenshot) and a couple of particularly crude jokes as well. It’s also nice to notice how some of these cactuses move in a couple of scenes.

Retrieved from "https://www.spaghetti-western.net/index.php?title=Roy_Colt_and_Winchester_Jack_Review&oldid=108047"
Category:
Cookies help us deliver our services. By using our services, you agree to our use of cookies.