Sartana's Here... Trade Your Pistol for a Coffin Review

This movie was released in Italy a few months before two other Sartana movies, but it may have been the last to be shot (1). George Hilton replaced Gianni Garko in the title role. For this reason, some fans of the series don’t see it as an official Sartana. To them, the name of Garko and the Sartana character are inseparable and they also felt that Hilton was too gentle, too much Halelujah to be Sartana. The premise of the movie, is one hundred per cent Sartana and the film is lightweight but it's also surprisingly well-made and entertaining.

Our black-clad hero witnesses an attack on a gold shipment and discovers that instead of gold, a load of sand was transported (and supposed to be robbed). Intrigued, Sartana travels to the mining town of Apalusa and soon finds out that the local representative of the Mining company, Spencer, is conspiring with the Mexican bandit Mantas to pinch the gold. Sartana makes a bargain with Spencer but also makes arrangements with the beautiful saloon owner Trixie, who is also interested in the gold. Meanwhile another gunman, called Sabbath, has arrived in town. Spencer tries to play him and Sartana off against each other, but is eliminated by Mantas, who is, at his turn, eliminated by Sartana. If you think things will be settled in a simple shootout between Sartana and Sabbath, you’ve never seen a Sartana movie before. What about this beautiful Trixie? Or the mine workers?

Director Giuliano Carnimeo had always been a supporter of a more parodist approach, but his plans had been obstructed by Garko, who felt that the daring mix of comedy and extreme violence of the movies would only work within a tongue-in-cheek context, and would become ridiculous if they turned the whole thing into a farce. On the set of this movie, Carnimeo discovered that Hilton fitted his ideas better than Garko; as a result, the movie shows a strong tendency towards the absurd. A good example is the opening scene, with Sartana preventing an explosion (and the bandits from destroying evidence) by throwing his water canteen above the burning fuse and then shooting a hole in it so the water can extinguish the fuse! Note also that he was at least 30 yards away from the incident. Furthermore Sartana tricks out his opponents by whipping out his Derringer from his boots and three loaves of bread. I’m not kidding. 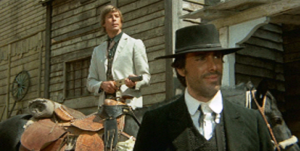 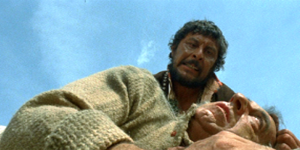 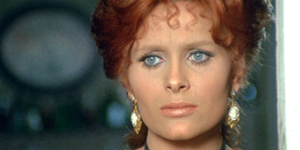 The jokes maybe a bit sillier than should be, but otherwise the movie qualifies pretty well as a Sartana movie. It has the trademark over-complicated plot with an endless series of twists and double-crosses, with everybody running after the gold. If it’s not a genuine Sartana movie, I’d say it’s closer in spirit to Sabata than to Hallelujah: there’s no Sewing machine gun here, nor is there a lethal Cossack or a nun on the run. The movie most outrageous character, Sabbath, is more in line with William Berger’s Banjo from the first Sabata movie: a ‘friend or foe’ who’s equally clever and resourceful as the hero. Overall the movie’s good fun, but the first half (beautifully shot in the Mexican town of the Elios Studios) is a bit better than the second and the finale pushes the silly jokes a bit too far (and stays too long with them). Erika Blanc is tantalizingly sexy, Pazzafini and Lulli are fine spaghetti western villains, and Southwood is pretty good as the parasol wielding, poetry reading, effeminate, but lethal sharpshooter.

Hilton replaces Garko in the title role, in this lightweight but surprisingly well-made and entertaining Sartana adventure. Charles Southwood is Sartana’s ‘friend or foe’ and his reversed image, the white-clad Sabbath