Sartana Kills Them All Review 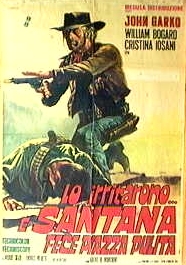 Santana (or Sartana) and Marcos are two partners in crime. Along with their many episodic clashes with the law and other outlaws, these two are trying to steal a briefcase of money from various parties, involving a depraved, Deliverance-esque, outlaw family, the lawmen and their posse, themselves and a pretty femme fatale.

By 1970, with the arrival of Trinity, comedy buddy Westerns soon became the word of the day. And even if this one was made in the same year as Trinity, it feels like it is sitting right on the fence between Comedy and serious. In almost every Spaghetti that gives a Mexican a major role, there's bound to be Comedy, this is no exception. But the inclusion of Garko, and some very sadistic and disturbing moments make it quite clear it's not really too comedic.

First off, the film has nothing to do with Sartana. Yes, it has Garko and in some prints, he's referred to as Sartana, but not only is he not in his Sartana mood or attire, but the original name of his character was and is Santana. A much more fitting name for his character. Apparently, the distributors either misread or mislabeled the title and marketed it as a Sartana film. Hence, SARTANA Kills Them All. In reality, it is Santana Kills Them All.

As for the film, it is a mixed experience. On the whole it is an enjoyable and altogether likable movie but one that has a (un)healthy amount of problems. The film's main focus is squarely on the two partners, Santana and Marcos. The plot we are given is only an excuse for us to observe the two buddies. Therefore, the plot is barely explained and probably doesn't even amount to half the screen time's focus. And if you take away the backbone of the film (plot) you're left without a whole lot to hold it up except the two leads. With this added pressure on them, it is amazing that they pull it off. But just barely, as the absence of a strong plot is still very evident by the end. 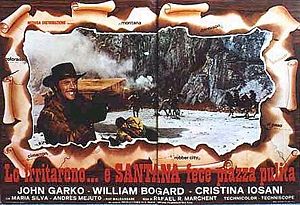 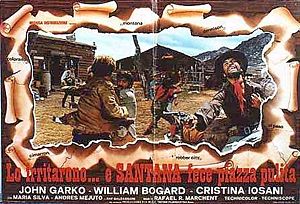 Another problem with this film and many others of it's ilk, is that it can't decide whether to be serious or funny. It can't be labeled comedy as it has far too many disturbing moments. But the characters are at many times, goofy and less than serious with each other, even when faced with imminent death. But this only makes for good chemistry which the two leads establish. Giving the film what it needs to be a buddy film.

On the lighter side, the film has a pretty good pairing to it. It's not too action packed but the showdowns and gunfights are all very well filmed. While also allowing the buddies the time to mess around and joke and make comedy for us. The opening of the film probably sums up the rest of the film wonderfully. We open in the middle of a standoff. The sheriff sent by Judge Parker is after Santana and Marcos, who are holed up in a cabin. In this sense, the mixture of serious action with the lighthearted interplay of the two leads (they play a game of poker to see who stays and who goes, with the utmost calmness), perfectly explains the rhythm and future of the film. Not to mention the fact it's a great opening scene.

The two leads are good in their roles. Particularly Spolentini, who definitely steals the show as the happy and goofy Mexican (seriously, any Mexican lead in a Spaghetti is always fun). Usually in this type of role, the sidekick is left with the jokes while the main guy, does all the killing. Not so here. It is the sidekick who mounts the highest kills. Gianni Garko plays his character with an Anthony Steffen touch. I like Steffen a lot but he didn't have range. And Garko plays his character dead serious and has a very small presence. (Steffen has presence I think). Garko doesn't really have to act here. Or so Marchent thinks. But without his usual sly humor or theatricalities Garko's presence is minimal. One of the main attributes to his presence is his acting abilities and since they aren't called upon here, he loses presence. Or maybe, he can't play a role where his sidekick overshadows him.

The very competent Spanish director, Rafael Romero Marchent, gives the film all the right amounts of ingredients. He balances most things quite well and keeps things interesting. Marchent's Spaghetti output are sort of assembly line films. There is little that sets them apart from others but he always makes them very good with the right pacing; the right amount of action and the right characters. Competent direction all around.

Giombini's score is somewhat famous because of the very catchy opening song. Ride Along. It's a little cheesy of course in that it sings about the main characters too obviously. But it's not bad. Just nothing too special. The score also has derivatives of this tune all done well enough. A small scale score though.

All in all, one a Spaghetti fan would most likely enjoy as there isn't a whole lot here to dislike too much, but if the problems are too evident for your liking, maybe not. But remember, any film Sartana is in, he will definitely kill them all. --Korano 23:56, 13 October 2009 (UTC)