Savage Gringo, aka Ringo from Nebraska, is a 1966 Italian, Spanish co-production [Italian International (Rome), Castilla Cooperativa Cinematográfica (Madrid)] directed by a little-known Spanish director, Antonio Roman. There is some dispute among scholars as to the degree of Mario Bava's involvement in the making of Savage Gringo, an issue also recently taken up by colleague Simon Gelten in an analysis that accompanied his review of the film. 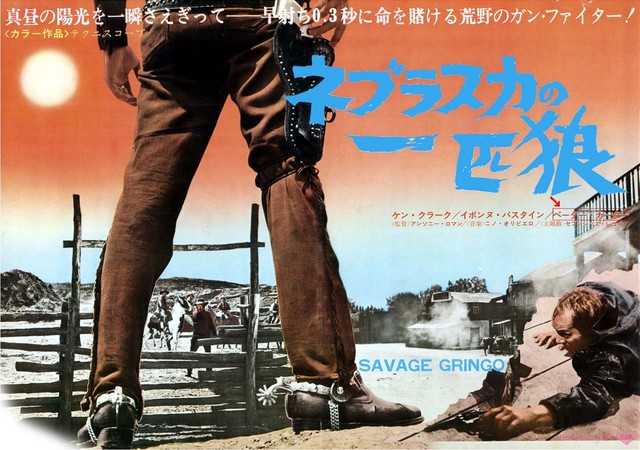 Let's face it, the reason SAVAGE GRINGO / Ringo From Nebraska garners any wide spread attention at all is because it is a film that the great Mario Bava directed. Bava was uncredited on the film, hired after the original director Anthony Roman was terminated after completing only a small portion of the film. Anthony Roman, who also co-wrote the screenplay was married to Yvonne Bastien who played the female lead (Kay) in this film, who stayed on after Roman' s termination. Bava who directed 36 films in all different genres including three spaghetti Westerns, is best remembered for his horror and GIALLO films. The three spaghetti western films that Bava directed which includes this film, THE ROAD TO FORT ALAMO (Italy, France, 1964) and ROY COLT AND WINCHESTER JACK (Italy, 1970) are all decent examples of the genre, but lacks the brilliance of some of his other helmed films like BLACK SUNDAY (Italy, 1960), BLOOD AND BLACK LACE (Italy, France, Mexico, 1964), THE WHIP AND THE BODY (Italy, France, 1963) and KILL BABY, KILL (Italy, 1966).

Ken Clark who plays Nebraska in this film, a loner who rides into a ranch under siege, was also in Bava's ROAD TO FORT ALAMO (Italy, France, 1964). Nebraska is another man with no name, or a man with an alias who rides into conflict and helps the underdog. The thing with Nebraska is the fact that while Clint Eastwood characters from the dollar films were in it for monetary reasons, Nebraska is in it only to see how things play out. The besieged ranch that Nebraska rides onto is owned by Marty Hillman (Alfonso Rojas) and his wife (who's not really his wife) Kay. Hillman offers the quick draw Nebraska a job working on his ranch, mainly to keep an eye out on his wife and a man named Carter. 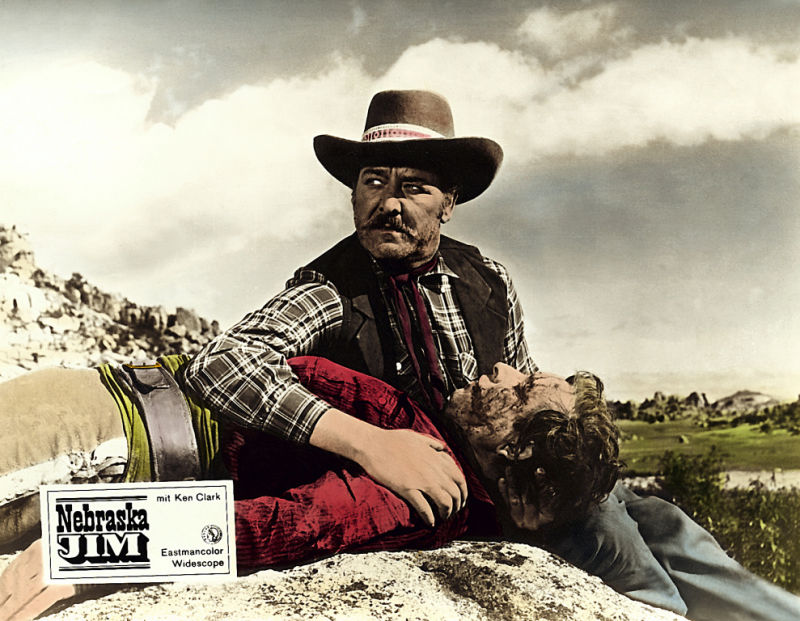 Bill Carter is played by the great Italian character actor Piero Lulli who has 108 acting credits on his resume including many spaghetti westerns where he specialized in playing bad man, his credits include DJANGO KILL... IF YOU LIVE SHOOT (Italy, Spain, 1967), VENGEANCE IS MINE (Italy, Spain, 1970) and LIGHT THE FUSE... SARTANA IS COMING (Italy, Spain, 1970). Hillman and Carter know each other well as they fought together in the war, not friends Hillman says. Carter it seems appeared out of nowhere and took over the town of Belton through intimidation and controls everything there. But everything is not as it seems and will be revealed in due time. Kay upon first meeting Nebraska is infatuated with Nebraska, and there is a burning smouldering intensity between the two, but Nebraska never succumbs to the lust and leaves that on the table, he wants to make love to her but fights back his feelings. After Nebraska defeats Carter in fisticuffs at the saloon after accusing three of Carter's men for the murder of one of Hillman' s men and getting them locked up, Carter lays in wait afterwards and plugs Hillman in the chest and shoots Nebraska's horse out from under him. Carter returns to town with his gang of men and intimates the drunken sheriff Bert (Livio Lorenzon) into releasing his jailed men. The sheriff heads out to check the murder site of Hillman's ranch hand and while doing so is shot in the back by Lou (Howard Ross), who is Carter's right hand man. The saloon owner named Brack is named sheriff and with a posse that includes Cater and his men head out to capture Hillman and Nebraska.

The group decide that Nebraska had killed the sheriff and wounded Hillman after finding the dying Hillman at his ranch, they search the surrounding hills, but Nebraska out foxes them. Hillman lies in the bed dying, Joe a ranch hand was sent for the doctor played by Francisco Sans, best known for his portrayal of Hagerman in the film DJANGO KILL...IF YOU LIVE SHOOT, alongside Piero Lulli who played Oaks. The question is raised throughout the film as to why would Nebraska stay and fight when he had nothing to gain and everything to lose. Tom Betts the spaghetti western expert has this to say, "Nebraska tells Kay he’s decided to stick around and fight this inherited battle: 'Curiosity…that, and the fact that Marty called me 'friend' before he was wounded" . “It’s not too far of a stretch to see in Nebraska’s position a metaphor for Bava’s own, on this assignment; both men have been recruited on the basis of shown talent, to fight another man’s battle, to protect another man’s ranch." 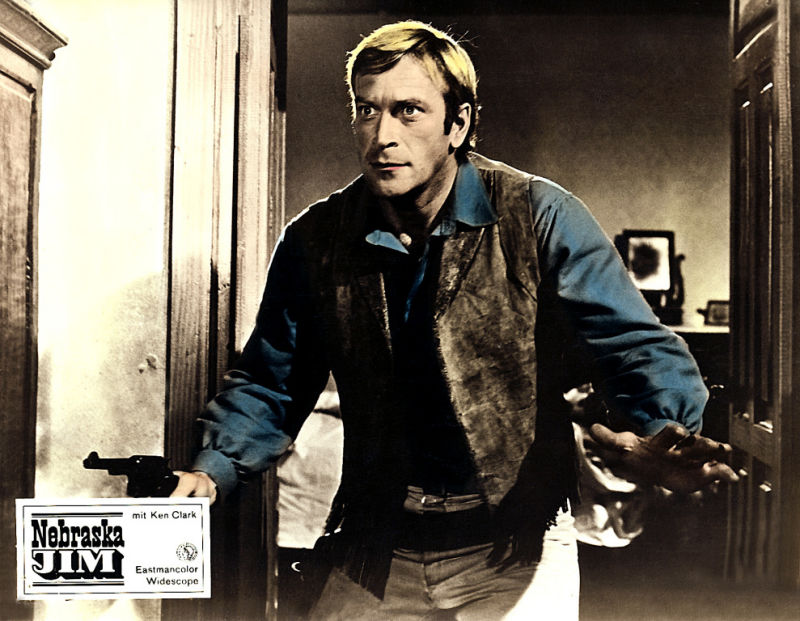 Nebraska gets some of Carter's men to spell the beans. Nebraska gets the sheriff and his men over to his side and they set out after Carter. Carter leaves his ranch after his man Dickson played by the great Frank Brana tips him off the sheriff and posse are on the way. The doctor has arrived too late and Hillman is dead. Carter, Lou and Dickson arrive at Hillman' s ranch and the whole twisted story is revealed about how they were all connected together by a bank robbery and $50,000 dollars in loot that Hillman was hiding somewhere around the ranch. The money is located but all in revealed to Nebraska who has snuck in and hidden himself in the death bed of Hillman beneath a sheet. Kay's father was Duke Krammer, a blood thirsty bank robber and Hillman was an alias, and Hillman was really a wanted murderer and Kay is only pretending to be Hillman' s wife because she is frightened of what Carter will do to her. Nebraska surprises the men and shoots Lou and Dickson dead, Carter grabs Kay as a shield, until Nebraska attacks Carter and they fight, Nebraska thinks that Carter is knocked out, but Carter shoots at Nebraska from a prone position and misses, Nebraska returns fire and kills Carter. Nebraska returns the money to the sheriff and jumps on his horse, the smitten Kay runs out to the porch to try and stop Nebraska, but he rides off.

While the film is enjoyable, it and Bava's other spaghetti westerns always leave that what if lingering in my mind. What if Bava would have made a gothic horror western? What if his legendary camera and technical skills would have been utilized in these films, what if. But what we have is what we have, three middle of the pack spaghetti Westerns that would be totally forgotten except to the spaghetti western fanatics, if his legendary name wasn't attached. The actors all do a great job, Ken Clark is very likable as the intelligent hired gun, who has a conscious, and does things because he gives his word, not for monetary gain. Clark is probably best known for his role as Dick Malloy, agent 077 in three euro-spy films, MISSION BLOODY MARY (Italy, Spain, France, 1965), FROM THE ORIENT WITH FURY (Italy, Spain, France, 1965) and SPECIAL MISSION LADY CHAPLIN (Italy, France, Spain, 1966). 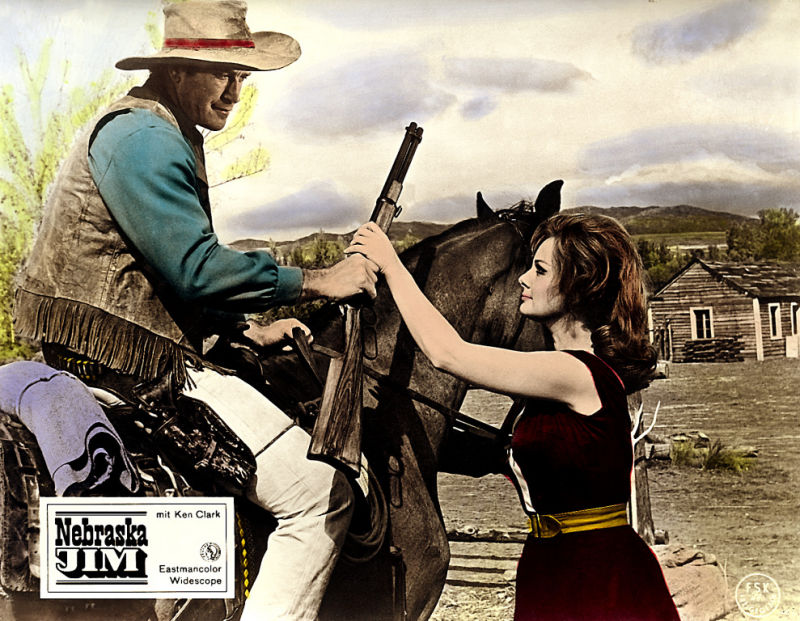 The Wild East company who released this disc are one of the few legit production companies in the United States releasing spaghetti westerns and that alone is reason enough to applaud this release. The film is cobbled together from different sources to give the most complete presentation of this film on DVD. Some scenes are in Italian (I am guessing) and have onscreen subtitles. There is a few audio issues and a few instances of the blacks being a bit chalky looking as in the scene at the ranch, with the doctor in his black overcoat. But all in all a beautiful presentation that really highlights some of the wonderful photography on display here, the camera angles and framing in most shots are fantastic and this disc really brings that home. SAVAGE GRINGO is presented along with the Stephen Forsyth spaghetti western IN A COLTS SHADOW (Italy, Spain, 1966) on a single disc presentation by Wild East. Both films are widescreen anamorphic presentations that includes picture galleries, theatrical trailers and an interview with the always fascinating Alfredo Leone speaking about Bava.

Thanks as always to Tom Betts for his help on this review.

Article written by Michael Hauss, author of several reviews for Monster magazine, We Belong Dead, Multitude of Movies, Divine Exploitation and blogs that includes Multitude of Movies, Theater of Guts and the SWDb. He has a love of film with particular interest in the Spaghetti Western and Horror genres. Michael lives in the United States where he resides with his daughter and their two cats Rotten Ralph and Fatty boo-boo.
Retrieved from "https://www.spaghetti-western.net/index.php?title=Savage_Gringo_Review&oldid=100928"