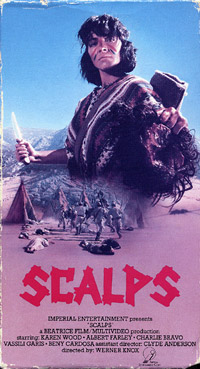 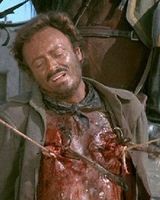 A late, very late Italian western, made in 1987, when even the Twilight spaghettis had become a distant memory. The script is accredited to four screenwriters, among them director Mattei and well-known genre actor Richard Harrison, who had also written the original story, in collaboration with his son Sebastian, who had appeared in the twin movie Bianco Apache, released a year before. Harrison would originally produce the film himself (and probably star in it), but wasn’t able to finance it and therefore sold his rights (1).

In the aftermath of the Civil war, a group of Southern cutthroats (still in uniform because they refuse to surrender to the North) visit an Indian village. They want to ‘buy’ the chief’s daughter, Yari, as a present for their commander, the racist colonel Connor. When the chief refuses to trade, the girl is taken by force and the rest of the village slaughtered. At night Yari manages to escape and to take refuge in the ranch of a farmer called Matt, a man living on his own. Matt hates Indians, but hates rednecks even more; he nurses the girl back to health and leads her into the mountains to escape from the men who are still after her, but by then the two have fallen in love and Yari is now obsessed by the thought of revenging her slaughtered people. In a cat and mouse game, she starts killing and scalping the racist soldiers one by one, but then Matt is captured by the soldiers …

Like several other Italian Indian westerns, Scalps is strongly influenced by Soldier Blue, even though it’s a revenge story, and the American movie wasn’t. Both Matt’s fight to the death with a hostile Indian warrior and the cave scene, with a wounded Matt defended by Yari, are lifted from Ralph Nelson’s movie. However, with the soldiers being presented as southern cutthroats who do things on their own hook, the premise is different, and seems to exclude political implications about the mistreatment of the Red Man by the US government. The film lacks all possible authenticity; it has a fake look and the shabby Confederate uniforms (apparently designed by Mattei himself) look particularly corny. The Indians are supposed to be Comanche, but they’re dressed more like Apache, and when Yari speaks about white men she refers to them as wasichu, which is a word from Lakota, the Sioux language.

But, surprisingly, this doesn’t mean that Scalps is a total failure. When you’re prepared to overlook its obvious shortcomings, it’s actually quite entertaining. The storyline is lively, and the romance may be a bit soapy, but the action scenes are competently staged and there are a few harrowing moments of physical brutality, with a protracted torture scene (inspired by A Man called Horse) and a particularly nasty scalp scene. Performances vary a little. Galán is said to be a former model, but according to IMDB she also had a long acting career as an actress and even directed her own (short) movie a few years ago; overall her acting is more than adequate and she's also tantalizingly sexy, with a few (albeit brief) semi nude scenes and walking around, most of the time, in the Indian version of a mini skirt. Karis isn’t too bad either, but I wasn’t pleased with Farnese, who hams it up as the racist colonel Conner.

Indians had not been very popular during the heydays of the genre, and in that aspect, Scalps is a typical post-spaghetti, but in presenting its villains as psychopathic southerners who refuse to surrender to the Union, it also refers to the very first years of the genre, and movies like Corbucci’s The Hellbenders and Albert Band’s The Tramplers, set in the aftermath of the Civil War, and dealing with renegade Southern officers dreaming about reviving the Confederacy. The violence is unusually graphic for a spaghetti western, but seems to disappoint those gorehounds familiar with some of the directors other (and better known) movies. You can't please 'em all.

How to watch this movie: There seem to be at least two different (official) versions of the movie; the Italian version has a running time of about 92 minute, the Spanish version runs 5 minutes longer); Mattei signed the first as Vincent Dawn (a homage to George A. Romero’s Dawn of the Dead) and the latter as Werner Knox. Both versions are said to be ‘uncut’ in the sense that the gory scenes are intact, and I don’t know what the exact differences are. The German release by VZ Handelsgesellschaft seems to have the Italian edit, the Spanish release by Suevia (understandably) the longer Spanish edit (see: Scalps, venganza india/DVD). I watched a TV showing by French action movies network (called ‘Action’) that was signed ‘Werner Knox’. It was a very decent print and I didn’t notice any cuts.