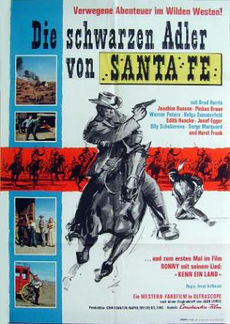 A bloody Indian raid on a small town sends the townspeople to the local fort for help and protection. With only a handful of men left in his command and his hands tied by massive Army red tape and regulations, the Captain of the fort enlists the aid of frontiersman Clint McPhearson (played by Brad Harris) to help him figure out why the Comanches are on the warpath.

After Die Goldsucher von Arkansas (Massacre at Marble City, 1964) presents movie Die Schwarzen Adler von Santa Fe (Gringos Do Not Forgive, 1965) second co-productive project of West Germany - Italy - France that was partly released in collaboration with former Czechoslovakia. While first movie was distributed in Czech distribution in 1967, this second movie never was official distributed in our distribution. Unofficial Czech title "Černí orli ze Santa fé" is only informal title from contemporary film periodicals, mainly from magazine of Czech popular journal Kino where is short reportage about Czech stuntmen who collaborated on this movie. In the framework of productive conditions and collaborating between cinemas of East and West Europe is interesting use of locations. Some exteriors were shooted in the same Czech locations as in case of previous movie, mainly in woody construction of western town on grassfield behind the Barrandov Studios that was originally constructed for Oldřich Lipský's Limonádový Joe (Lemonade Joe, 1964). Another exteriors were shooted in locations of Almeria in Spain that presents predominant part of exteriors used in this movie. Die Schwarzen Adler von Santa Fe unconventionally combines using of Czech and Spanish exteriors which is unique and sporadic case of this type of using exteriors in the context of West European genre co-productions of 60' and 70'. All interiors were filmed again in Barrandov Studios in Prague. These informations of using of locations for both movies (Die Goldsucher von Arkansas, Die Schwarzen Adler von Santa Fe) confirmed to me in one phone conversation before some times actress Olga Schoberové who acted in both these projects. This movie was produced by the same producers German Wolf C. Hartwig and Italian Mario Siciliano and on making of this project worked almost the same technical team as in case of previous movie. From the Czech side collaborated there again production designer Jan Zázvorka, costume designer Fernand Vácha or stuntmen František Žák and Jiří Lánský. Supposedly exists also Italian versions of both these movies (Italian versions are known under the titles Alla conquista dell'Arkansas and I gringos non perdonano). Both Italian versions directed by Alberto Cardone who was specialized in Italian spaghetti-westerns and who is in German versions at both these projects credited as second unit director.