From The Spaghetti Western Database
(Redirected from Sergio Corbucci)
Jump to: navigation, search 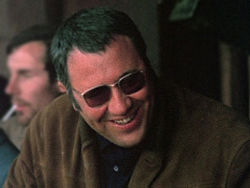 Sergio Corbucci was born December 6, 1927 in Rome. He was, next to Sergio Leone, the most influential and talented director of the Spaghetti Western genre. Both Sergios got their start as film critics. Corbucci wrote for "Schermi del Mondo" and after the war for "Stars and Stripes". He made his first steps in the genre early in 1963, but it wasn't until 1966 with his 4th western, the epochal Django, that he became one of the key figures of SWs. He reached his peak in 1968 with The Great Silence and The Mercenary, which also brought him into the spotlight of the contemporary political discussion. After Companeros his style quickly declined and in the mid 70s he turned back to the comedy, with several popular films, some of which were highly successful in Italy. He died December 1st, 1990 of a heart attack.

The following 34 pages are in this category, out of 34 total.

Retrieved from "https://www.spaghetti-western.net/index.php?title=Category:Sergio_Corbucci&oldid=139611"
Category:
Cookies help us deliver our services. By using our services, you agree to our use of cookies.