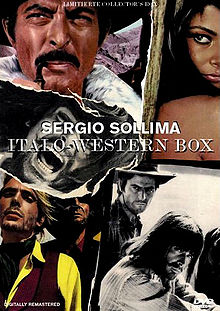 This DVD is published in Germany by Koch Media. (Region 2) The DVD offers English subtitles.

Koch Media brings us the greatest piece in their portfolio. The Sergio Sollima box is an essential release for any Spaghetti Western fan. Three A-list films in great presentation. The Quality is great, the extras are awesome (although not english subtitled) and the packaging is luxurous. The book rounds up this great box. Koch Media has done an outstanding job with this, you whould definitely have this in your shelf

Retrieved from "https://www.spaghetti-western.net/index.php?title=Sergio_Sollima_DVD_Box_review&oldid=101787"
Categories:
Cookies help us deliver our services. By using our services, you agree to our use of cookies.