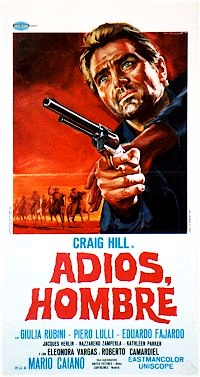 Tiny and his gang try to rob a bank, but the safe is empty. Waiting for the announced gold transport they hold the whole town captive. Amongst them is Will Flaherty who has escaped from prison to prove his innocence.

Some bad guys trash a saloon and kill a lot of people while waiting for a shipment of gold to arrive at the local bank in this entertaining Spaghetti Western from the director of "Amanti dei Oltretomba". Eduardo Fajardo is as evil and over the top as usual, while Craig Hill is the hero of the piece as an ex-con (wrongfully accused, of course) who saves the day. Director Mario Caiano worked extensively in Westerns (Il Mio Nome e Shanghai Joe is marvelous), but is best known as a horror director, as is this film's co-cinematographer Sergio Martino (I Corpi Presentano Tracce di Violenza Carnale). Genre enthusiasts will recognize Nello Pazzafini, Spartaco Conversi and Roberto Camardiel among the cast.

A film which doesn't make any real effort with anything in it, so that a basically promising story is wasted in an average actioner. // by Stanton