Rik Van Nutter, best known for his appearance as Felix Leiter in Thunderball, is Bill Cody, that is Buffalo Bill. He's asked by the government to track down gun-runners selling Winchester rifles to the Indians. Several tribes are threatening to start a war on the settlers heading West and the peaceful inhabitants of Louisville. Cody gets some help from that other Bill, Wild Bill Hickok, and a person called Frank North, a white man living with the Utah Indians. North has first done business with the gun-runners, but then decided to side with the whites in their war against the Sioux.

At least, that's how the Spanish and Italian language versions read the story. The German edit is quite different. Buffalo Bill and Bill Hickok have become Bill Hogan and 'Gun' Barrow, and the story (villainous white businessmen provoking an Indian uprising, so they can lay their hand on the gold belonging to the Indians) is more constructed like a Karl May story. This is emphasized by a different soundtrack, very close to Martin Bötcherr's score for the Winnetou movies (*1). In the German version the Sioux have become Comanche. The character played by Gloria Milland is also completely different in both versions: the German version opens with a scene in which she tells Gun Barrow that it's all over between them: he's a good man, but she won't live with an eternal drunk. In the Spanish and Italian version she is Calamity Jane, madly in love with Wild Bill, following his footsteps wherever he goes. In both versions Wild Bill is shot in the back (*2), like in real life, but not while playing poker, and not by a victims' son, but by the main villain, and in the middle of an Indian attack on the town of Louisville. 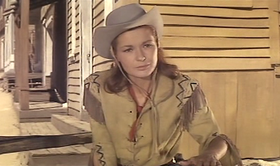 As usual Marchent shows some sense of style, and the finale, with the inhabitants of Louisville setting a trap (in Wild Bunch style) for the Sioux is genuinely exciting. If you don't mind these early European Cavalry-versus-Indians westerns, this is not a bad movie, even though the costume design is often hilarious. While chasing gun-runners and fighting renegade Indians, Bill & Bill also have quite a few troubles with the ladies. Gloria Milland is very lovely as Calamity Jane and it's nice to hear her being called Juanita Calamidad. Buffalo Bill, on his turn, is severely criticized for being a brute and a racist by the liberal daughter of a traveling priest, a true man of God, who has told his little girl that violence, even in self-defense, is completely wrong. But the father is killed and afterwards the daughter sees things differently and realizes that the great Indian fighter and buffalo murderer has a heart of gold.

That's all very nice, but the problem is the editing. I guess Marchent had a much longer film in mind, but was forced to cut it back to acceptable length. It all looks a bit casual and disjointed now. Over the years distributors might also have created alternative cuts in order to make the film look more action-packed (that's what happened to several of those early pre-Leone productions). With a Spanish, Italian and German production company involved, Marchent must have had a decent budget, but apparently there was no money for an extra sombrero. Constantin Film had hired Klaus Kinski, a rising star in Germany, but when he arrived in Spain, he disapproved of all sombreros offered to him by the costume department. Instead he wanted the one worn by another actor, Mario Morales, in a couple of scenes already shot. Kinski ordered Marchent to give him the sombrero and reshoot the scenes with Morales, otherwise he would pack his bags and go back to Germany. The two men came to blows, Marchent knocked Kinski down, and sent him back to the airport. Case closed (3).

Retrieved from "https://www.spaghetti-western.net/index.php?title=Seven_Hours_of_Gunfire_Review&oldid=105604"
Categories:
Cookies help us deliver our services. By using our services, you agree to our use of cookies.