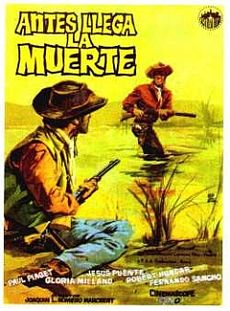 Today Joaquín Luis Romero Marchent is best known to large audiences for his controversial gore western Cut-Throats Nine, but fans of his work often have a preference for his early western output. Most people think Antes llega la Muerte, is his best movie; it's a beautifully made, semi-autobiographical melodrama, about several men who are prepared to do anything to save the life of the woman they love, even when they realize she is beyond help.

The film opens with a scene in which a young man called Bob Carey is released from prison. He has spent five years in jail for shooting a man in a duel; he has always sustained it was self-defense, but the three brothers of the victim don't agree with the judge, and have sentenced him to death. When the oldest one of the brothers, Ringo, challenges him to a duel, Bob shoots him through both hands. While he was in jail, Bob's fiancée, the beautiful Maria, has married an older man, Clifford. What Bob doesn't know - what even Maria doesn't know - is that she has a malignant tumor and that her husband is told that there's only a small chance that one of those fancy doctors in the town of Laredo might be able to save her life. Clifford hires five men to accompany him on the journey to Laredo, a dangerous journey through the desert ...

As said, the film is semi-autobiographical. This is what Marchent said about it himself:

"It happens that my mother, a few years earlier, while still relatively young, was diagnosed with lung cancer. The entire family tried to find a solution, a possibility to extend her life in spite of the fact that the doctors had given up hope. We literally tried everything, even went to some kind of African healer. But nothing could be done, she was beyond help. So while making the movie I kept thinking, consciously or unconsciously, of this desperate struggle to save the life of a loved one. This misfortune had happened in Madrid in 1960, but was moved to Texas 1878." (1)

What makes the movie so successful, is the way the two storylines (the journey and the revenge) interact. We witness how Bob is ambushed in the desert by Ringo and his two remaining brothers. Bob is forced to kill the two brothers, but is seriously wounded himself, and denied any help from Ringo (still not able to use his hands), who decides to stay by his side, to watch him die from thirst and the loss of blood. But the two men are picked up by Clifford and his men. Bob is nursed back to health and Ringo is accepted as a new group member. Forced to co-operate, the two arch enemies develop some mutual respect. They defend the group against Apaches on the warpath, and also are confronted with a treacherous member of the group ...

The film is not without flaws. There's a large scale Indian attack on a cavalry fort, which is quite spectacular, but also feels thrown-in, and some of the more dramatic scenes are a bit overwrought. The costume design also leaves something to be desired. On the other hand excellent use has been made of the Spanish locations, from the snow-capped hills of the Northern Sierras to the Almeria desert. The film is pervaded with a strong feeling of fatality, and yet it is a very warm, emotional movie: Death is inevitable, and not only for Maria, but before death comes (like the original Spanish title says) various characters will get the chance to redeem themselves (2). And if Piaget isn't entirely convincing in the lead, Undari is excellent as the vengeful brother who finally comes to terms with the situation: this is no doubt his best performance in a western, be it spaghetti or paella. Several other performances are likewise excellent: Milland is so adorable as the suffering woman that we can understand men would give their lives for her, and Raf Baldassare is at his frightening best as the perverted villain, who wears the others down by shooting holes in their barrels and water-casks, thus leading the film to its bravura finale, set around a well, the only well for miles and miles around ...

This is definitely a pre-Leone western. It has an Americanized feel and - very typical for these early Spanish westerns - vengeance is still presented as a reprehensible feeling. Fernando Sancho's ebullient trouble maker is another indication that we're in pre-Leone land: he's not yet the Mexican villain he'd soon become (thanks to the Ringo movies), actually he's not a bad guy at all, but we sense he isn't completely trustworthy either, so all the time, we wonder what will become of him. The movie has some of the atmosphere of an Anthony Mann or Bud Boetticher western, but several other American westerns have also been mentioned as major sources of influence for Marchent's movie, such as Henry Hathaway's Garden of Evil and John Ford's Three Godfathers (which also had a desert setting and similar redemptive story elements); the name Ringo as well as Undari's character (a man who redeems himself during a journey), are clearly based on the Ringo character played by John Wayne in Stagecoach. Some other characters (the old man who still stands his ground and the wise-cracking Chinese cook) are closer to Hawks than to Ford. I had the idea that the large-scale Indian attack was inspired by the Winnetou movies, that were also very popular in Spain. The leitmotiv from Riz Ortolani's score, is also vaguely similar to Martin Böttcher's famous Old Shatterhand Melodie, written for Der Schatz im Silbersee (1962). 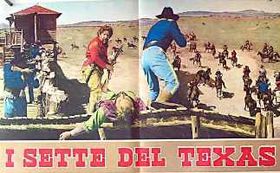 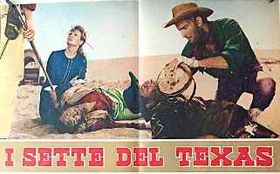 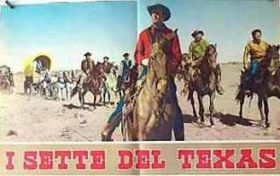 Retrieved from "https://www.spaghetti-western.net/index.php?title=Seven_from_Texas/Antes_llega_la_Muerte_Review&oldid=95622"
Categories:
Cookies help us deliver our services. By using our services, you agree to our use of cookies.