Seven from Texas is an early Spaghetti Western, or a rather peak Spanish production if you so will, by Joaquin Luis Romero Marchent from 1964. The movie was released as the result of a rather turbulent fundraiser and restoration campaign by Dorado Films, and not released widely at this point. I finally got around to watching it. Originally released in 1964, it is not the most well-known of the director's output, but that's a shame, as we shall see... 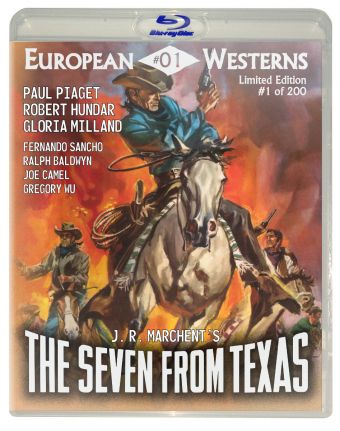 Upon hearing that Bob Carey (Paul Piaget) has been released from prison where he spent time for killing his brother, Ringo (Robert Hundar) sets out to even the score and kill him. But Bob is a fast gun, and can disable Ringo's hands easily. Bob's old love Maria (Gloria Milland) meanwhile has married someone else, Clifford (Jesús Puente), a local landowner. Upon hearing of Maria's cancer survival chances, he sells his lands, hires a few guns led by the Mexican (Fernando Sancho) and takes off on a perilous journey to get her into Laredo for better medical care. After an ambush by Ringo's gang fails, and Bob also gets injured, they're all in it together crossing Indian territory and making the journey together. The two men set aside their rivalry while they tend to their wounds and protect the trek....

It must be one of the best movies of its kind or let's say at least out of the Marchent stable, and I don't say that lightly. The movie offers and impressive cast, a captivating story, lots of interesting elements, high quality set and production design and many interesting locations (including in the snow). The music (by veteran composer Riz Ortolani) and style is more geared towards an American look, but the movie is unmistakably European, despite its ambitions. You get a revenge story, a horse trek adventure, native Americans and much more. It's quite an ambitious little movie that positively surprised me to say the least.

Seven from Texas, also known as Hour of Death, boasts some very familiar and best locations and makes great use of them. The movie feels very plausible and realistic, there aren't any over the top scenes, the main protagonists don't act like wannabe-supermen but like human beings with flaws. They are plagued by guilt and revenge, have illnesses and must survive. It's not a shootin' gallery, but the rough west.

Other than a lot of films of its kind, it's also very character driven, and as some reviewers have pointed out, they're all losers of some kind. There's neither ultimate bad guys nor absolute heroes in this one, just - eventually - seven fighting for survival, including, with some relieve without too much overt racism, a Chinese-American chef. Two thirds into the movie, there's a huge full on Indian attack on an army fort, there are scenes of horses stuck in the desert, gambling scenes, some delicate moments between husband and wife, it's a very colorful film that comes off as a very expensive and elaborate production, which culminates in some form of showdown and a happy end that leaves some questions unanswered. Seven from Texas left a very positive impression on me and it is certainly an absolutely fine entry in the genre, I hope this BluRay introduces more viewers to it.

The transfer of the BluRay looks okay for what it is. Contrast and detail are well preserved, but colors look rather faded and the image much too bright in general. I actually like that the image isn't much subject to any digital filtering or restoration (the screenshots used in this article are early samples and not necessarily representative of the discs, in particular the final presentation does not have that blue-green tint). That of course means lots of scratches, speckles and such, but that I much prefer to washed out, Lego-like look of some restorations where you have a clean image at the price of detail. There are however some sequences that do look worse than others. Overall, the image is satisfactory but by no means an impressive restoration. The audio is great. The English dub is of high quality and here it actually sounds very nice. As for the subtitles, I only tested the German ones, which are rather flawed but I applaud them for even including them. There are also subtitles in Spanish, Portugues, English and Italian. There are some trailers on the disc as well, but no extras.

There are a few postcards in there, and two booklets. One is by our very own Tom Betts where he also calls it Marchent's probably most accomplished film. The other is a more extensive background on the history, genre and the director, and it was written by Mike Hauss. I am glad the SWDb community had such an active hand in this release, even though it is not widely available. Also included in the package is a DVD of 100.000 Dollars for Lassiter which I am not gonna go into right now. It's a decent widescreen presentation with English audio, no subtitles.

Final verdict: Unjustly overlooked classic of the genre, excellent entertainment. The presentation here is a very solid effort, too bad it was plagued by ongoing release difficulty and the company is struggling to this day. It is alas not widely available, but if you see this BluRay somewhere on Ebay or so, I recommend shelling out the money, you will not be disappointed.