Shadow of Sartana ... Shadow of Your Death Review 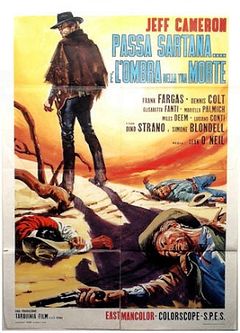 Released in february 1969 and made shortly before, according to the director in six days, this movie belongs to the early western production of the notorious Demofilo Fidani, often called the Ed Wood of the spaghetti western. It was shot without a budget (Fidani promised to pay his actors afterwards) and without a script. Fidani himself appears as one of the deputies (and mayor) of Silver City, wearing blue-shade sunglasses, looking very much like a character from a biker movie. To complicate things he used different pseudonyms: as a director he called himself Sean O'Neal, while the 'script' was signed Miles Deem.

The town of Silver City (a small town near the Mexican border with hardly any inhabitants, but an awful lot of deputies) is terrorized by the gang of the Randall brothers. The eighty-year-old sheriff is unable to do something about it, so one of his deputies, the one with the sunglasses, proposes to hire Sartana. The famous gunslinger has a price on his head, but he's known to Tom, Dick and Harry (and to ragtag and bobtail) as an honorable man who stands for justice. I know this doesn't sound completely logical, but you can't have it all in a Fidani. Sartana accepts the job and (I don't think this is much of a spoiler) exterminates the gang in violent fashion.

According to Fidani most of the 'actors' were either professional extras or stuntmen; one of them, the one who is credited as 'Dennis Colt' was a true acrobat, who was shot over and over again throughout the movie. We see him and his colleagues fall from rooftops, balconies, cliffs, you name it, performing pirouettes and somersaults while dying in spectacular fashion. Some of these death scenes are hilarious, one of them - the victim making a sort of flick flack without hands and feet - made me laugh out loud. Another great joke is the location, on top of a hill, of a destination-board telling horsemen which way is Texas, and which way is Mexico. Of course the movie bears no relation to the Sartana movies starring Gianni Garko. Cameron doesn't even wear the distinctive black Sartana outfit in the lead. His face is a bit too fleshy to be a convincing ersatz Sartana, but he has a certain screen presence, and he's also a good horseman, which helps a lot, as there is (as more often is the case in a Fidani) a lot of horse-riding.

I'm not the greatest Fidani-expert in the world (I think it was only my second or third Fidani), but I think it's an above average achievement. Of course it's not great, it looks as cheap as it was, but there are a few redeeming qualities. If you have Fidani, you often also get his daughter Simonetta, the most beautiful pair of eyes in spaghetti land. Her appearance in the movie is brief but noteworthy. She's kidnapped, gauged and left behind in the desert by the bandits. And there's also the beautiful Mariella Palmich. Oh dear. Aristide Massaccesi (that is Joe d'Amato) keeps his camera as busy as the stuntmen, constantly looking for odd zooms and angles, making the very best of the Lazio locations (mostly sandpits and puddles). The protracted fistfight in the mud which concludes the movie, is well-performed and well-shot. Lallo Gori's score sounds over-familiar and probably is no more than a series of variations on existing tracks, but it suits the movie pretty well. 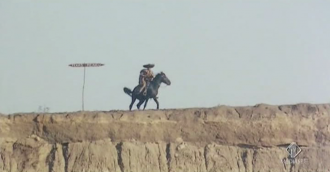 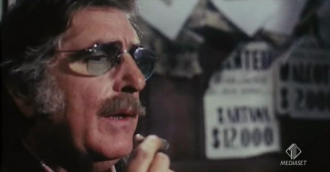 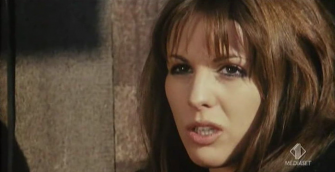 Retrieved from "https://www.spaghetti-western.net/index.php?title=Shadow_of_Sartana_..._Shadow_of_Your_Death_Review&oldid=114281"
Categories:
Cookies help us deliver our services. By using our services, you agree to our use of cookies.