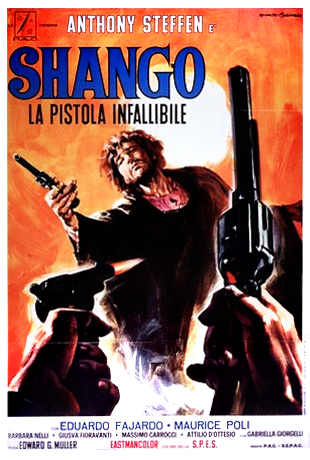 The Civil War is over but a maniac Major, played by Fajardo, intends to keep his troops and townsfolk in the dark to maintain his power over the area. Ranger Shango (Anthony Steffen) is captured by the Major and framed for the murder of the local telegraph operator, the only person capable of receiving the news that the war has ended. However, Shango escapes, determined to bring down the insane Major and end the abuse of the townsfolk.

In its better moments this film is as exhausted and bewildered as its characters, in its weaker moments it's only a series of unsatisfying shoot-outs, in which Steffen fools and shoots his enemies by the dozen in too typical SW manner. Apart from the wrongly directed action scenes, Mulargia delivers beautifully and inspired staged pictures, but the ill-conceived script (co-written by Steffen and the director) fails to create the necessary tension between the characters. Shango has a great beginning and a good ending, but no middle.