Sheriff with the Gold 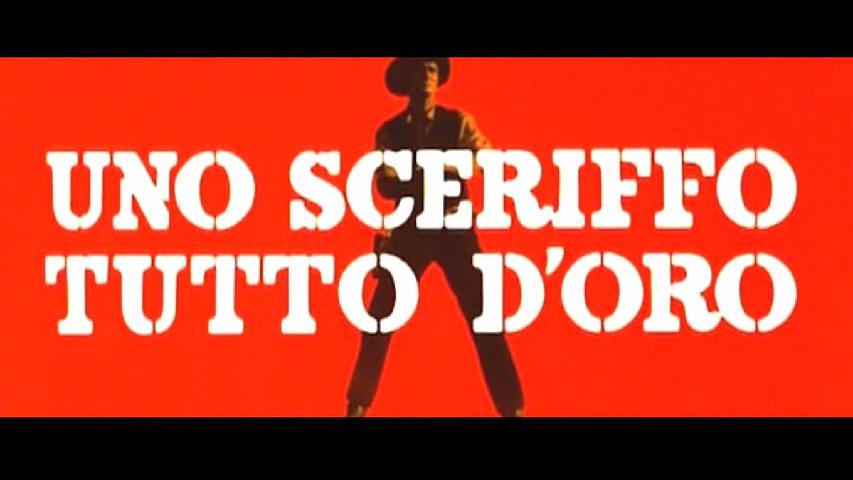 Right after the legendary Don Powell belts out the opening vocal, all hell breaks loose on screen in Sheriff with the Gold (Uno sceriffo tutto d'oro, 1966). A sheriff’s office is besieged by some deviant scum, who have obviously taken control of it and thus the entire town. The twitching, grinning Luciano Rossi appearing as Jack, while swilling from a whiskey bottle, harasses some townsfolk with shots from his colt. But, his tormenting is to be short-lived after a horse carrying the draped body of a federal sheriff wonders into town. The federal sheriff though is not dead and proceeds to cut down the gang in an energetic, adrenaline filled scene. The federal sheriff Jeff Randall (Jacques Berthier), is depicted as such, to show the viewer what he does to earn his measly salary, which is only sixty-dollars a month. So, as the El Paso sheriff and Jeff talk about their economic hardships, an idea is planted into Jeff's head. 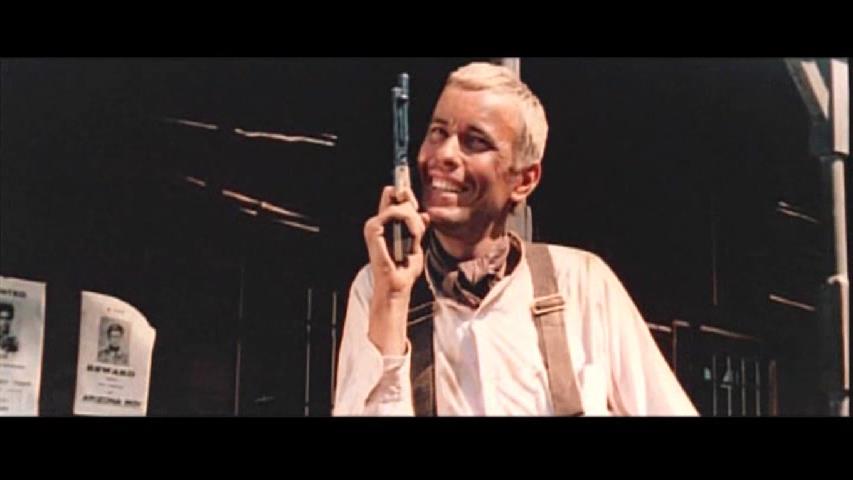 This idea we would assume is the reward money for a criminal named Arizona Roy (Luigi Giuliani), who is introduced through a series of crimes, but Jeff has a much bigger plan in mind than that simple reward money. Arizona Roy though is captured for a variety of crimes including robbery and murder, before Jeff can act. The judge back in Blackstone City has issued a subpoena for Roy to be brought back to town to testify in a case involving horse stealing, in which Roy has been implicated in. This though is just a ruse by Jeff Randall to put his plan into action. Jeff arrives just in the nick of time, as Arizona Roy is hanging from the gallows until the rope is cut in two from a bullet by Jeff. As the duo makes their way, it becomes apparent to Roy, that they are not going to Blackstone City. Jeff tells Roy that he wants him to help him escort a stagecoach carrying a half-million dollars in gold across the border into Mexico. Jeff offers to split the gold in half with Roy, using the logic that this action will be putting the suspension firmly on Roy and off himself. After the successful robbery of the stage, Roy makes off with the loot, but not before he kills off a large group of Mexican bandits, who ride for a man named Vargas (Fortunato Arena). At the designated meeting spot, an Inn where the men are to meet, lives a man and his woman Jane (Caterina Trentini). Jane happened to see Roy return the night of the robbery and saw him laboriously carrying up the heavy saddlebags. She tricks Roy into leaving the room momentarily, so she can get a look at what's inside the bag. Once she realizes there is gold in the bag, she decides to first seduce Roy and then play her boyfriend and Roy against each other. As the men come to blows after she deceives each, she makes off with the gold, but not for long as she loses the gold to Vargas and his men. 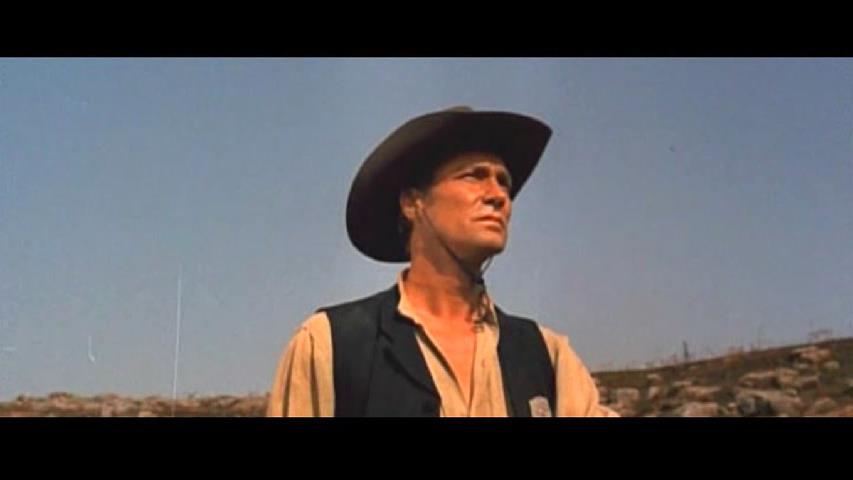 The film from this point is loaded with double crosses as Roy finds Jane and takes her to town and leaves her there. In town is where Jeff finds Jane after she had been deceived by Roy and left at the Inn. Roy who has unsuccessfully tried to retrieve the gold back from Vargas, is tied to a water mill. Jeff arrives, to meet Vargas pretending to be an arms dealer. As this plays out, Jane arrives in a wagon along with other women from the saloon, who have come to the hideout of Vargas to entertain the men. Jeff tells Vargas that Roy is his sworn enemy and wishes to kill him, with some provided dynamite. But instead of blowing up Roy, Jeff uses it to cause a distraction so as he can get Roy freed. Jane has made her way into the hideout and is trying to locate and make off with the gold but is stopped by Roy and Jeff who have made it to the room holding the gold after gunfire is exchanged. Thus, the three make it out into the desert but are trapped by Vargas and his men and try to shoot it out. With the situation appearing helpless, Jeff sends Jane to the nearby town of El Paso, to get his old friend the sheriff. Sheriff with the Gold is a very good film that was almost an excellent film. The Jeff Randall character is fleshed out and varies from the normal servant of the law into a criminal. Allowing the character who is morally upright and law abiding to break the law, but to never traverse too deeply into that unsavory lifestyle. His counterpart Arizona Roy is just a shallow shelled character with limited development. The Arizona Roy character plays more of a slick criminal who is introduced holding a woman hostage, only releasing her after receiving money from her father. Problem is, that the woman does love Roy and does not really wish to be returned to her father. The Jane character is silky, slinky and seductive, who in this game of deception, is equal to the other two men. The Roy character is basically only following his libido and in doing so is deceived by Jane as is her overly possessive boyfriend. 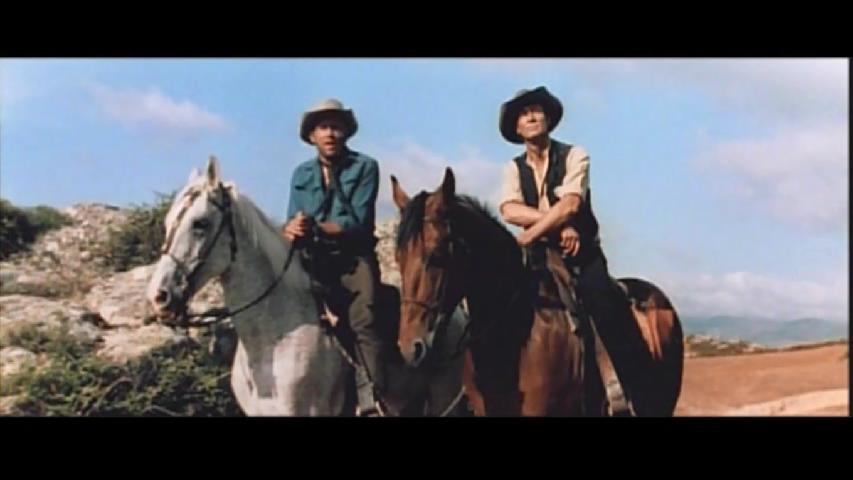 Jeff Randall essentially is on a mission to recover the gold, not believing at first Roy's story of how Jane made off with the gold. He does come around though saving the seemingly doomed Roy from the wrath of Vargas. When the action centers around gunplay the film comes alive, and those scenes are adroitly handled. The rest of the narrative seemed to dull in comparison and while engaging enough, the highs and lows, make this film a variable rollercoaster ride. All the actors turn in great performances, excepting Luigi Giuliani as Arizona Roy, who just isn't given a lot to work with. The Arizona Roy character is as a criminal a rather uninspired one. His crimes are never of an overtly violent nature and thus allows him unfortunately to be more of a character who does not garner emotion in a viewer one way or the other. Jacques Berthier as Jeff Randall is outstanding and fits easily into the role, his character is righteous, even after performing the bloodless robbery, and he can rectify his honorable status somewhat at the end. In a genre not known for allowing a female character to progress beyond prostitute or saloon girl, the Jane character is one of the highlights of this film. Coming from a life of severe poverty and used by men throughout her life, Jane decides that she shall wait for no man to bring her wealth and repeatedly tries to make off with the gold, as dreams of a new prosperous life in Mexico dances through her head. Luigi Giuliani appeared the year prior in his only other Italian western film, Ruthless Colt of the Gringo (La venganza de Clark Harrison, 1966). In that film, Giuliani displayed a certain charisma and physicality needed in these films. While that film is not a very good genre example, Sheriff with the Gold is, but it gives Giuliani very little to work with. Caterina Trentini only appeared in ten films, which is a shame as she was a capable actress, her other Italian western appearance worth noting and sadly her last screen credit is I Came, I Saw, I Shot (Tre che sconvolsero il West - vado, vedo e sparo, I, 1968). Jacques Berthier also appeared in the westerns Colorado Charlie (1965) and Shoot First… Ask Questions Later (Bianco, il giallo, il nero, Il, 1975). 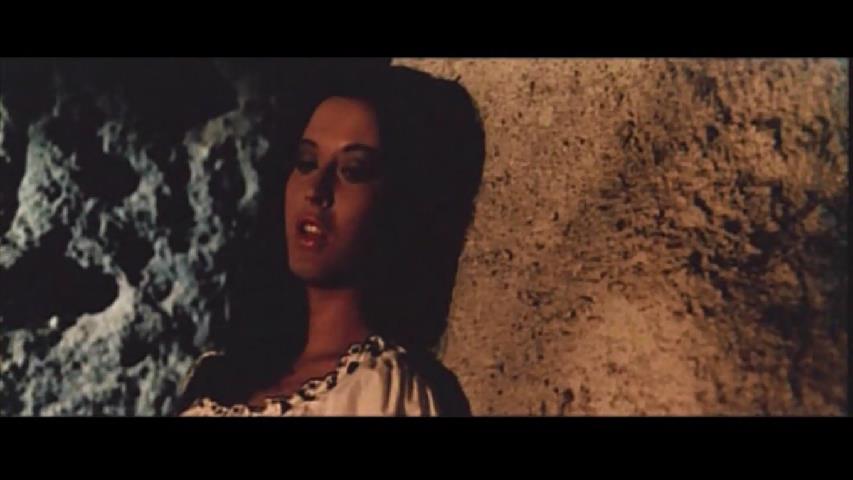 Osvaldo Civirani directed the film and displayed a certain flair for these films, which sadly never was on display in the fistful of westerns he directed after this, his initial foray into the genre. Civirani followed this film up with the muddled 1967 film Return of Django (Il figlio di Django) and would follow that up with a few comedy-westerns including, Rick and John, Conquerors of the West (Ric e Gian alla conquista del West, 1967), Trusting is Good… Shooting is Better (T'ammazzo! - Raccomandati a Dio, 1968) and the Franco and Ciccio film Two Sons of Trinity (Due figli di Trinità, I) in 1972. Enzo Dell’ Aquila and the prolific Roberto Gianviti co-wrote the screenplay. Dell’ Aquila is probably best remembered for contributing to the screenplay of Sartana the Gravedigger (Sono Sartana, il vostro becchino, 1969) and directing the underrated Italian western Tequila Joe (...e venne il tempo di uccidere, 1968). Gianviti is most noted for his work outside the Italian western genre, contributing the stories and to the screenplays for the Lucio Fulci films, Don’t Torture a Duckling (Non si sevizia un paperino, 1972) and The Psychic (Sette note in nero, 1977). But, Gianviti did contribute to a few noteworthy screenplays in the Italian western genre including, Any Gun Can Play (Vado... l'ammazzo e torno, 1967) and Have a Good Funeral, My Friend… Sartana will Pay (Buon funerale, amigos!... paga Sartana, 1970). Sheriff with the Gold was filmed in Sardinia, Italy and premiered on December 22nd, 1966 in Italy, a day before the classic Sergio Leone film The Good, The Bad and The Ugly (Buono, il brutto, il cattivo, Il, 1966) did. The film performed moderately well at the Italian box office.

Thanks as always to the spaghetti western expert Tom Betts. And a shoutout to Carl Black!

Article written by Michael Hauss, author of reviews and articles for Monster magazine, We Belong Dead, Multitude of Movies, Divine Exploitation, Exploitation Retrospect, Grindhouse Purgatory and Weng's Chop and various blogs that includes Diabolique, Multitude of Movies, Theater of Guts and the SWDb. He has a love of film with particular interest in the Spaghetti Western and Horror genres. Michael lives in the United States where he resides with his daughter and their two cats Rotten Ralph and Fatty boo-boo.
Retrieved from "https://www.spaghetti-western.net/index.php?title=Sheriff_with_the_Gold&oldid=111001"
Category:
Cookies help us deliver our services. By using our services, you agree to our use of cookies.