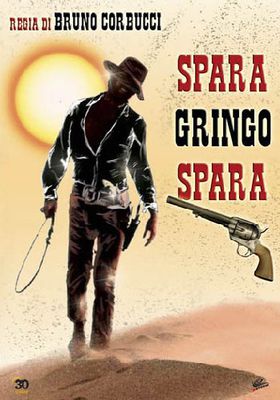 Stark is a gunman who's asked, by a Mexican landlord, to bring home his son who has joined a gang of outlaws terrorizing the border region. A lively, if unoriginal western of the manhunt type that turns into a sort of buddy movie. Some of the comedy borders on parody, but there's also a fair amount of violent spaghetti western action.

The opening scene is set on the Mexican side of the border. A man called Stark was framed for a crime he did not commit; he escapes from jail (by faking leprosy) and immediately goes after the man who set him up and kills him. After being captured by a posse, he's brought to a landlord called Gutierrez, a local bully combining (so it seems) the jobs of judge, jury and executioner. Gutierrez is willing to save Stark's life if he promises to bring Gutierrez' son Fidel (who has joined a gang of outlaws, led by a madman called "the major") back home. Stark infiltrates the gang and works out a stratagem to kidnap Fidel, but the young man is unwilling to return to his foster father ...

Spara, Gringo, Spara (also known under the curious English language title Rainbow) was directed by Bruno Corbucci, the Other Sergio's little brother. It's an odd movie, a western of the man hunt type that eventually turns into a buddy movie, a bit like Sergio Sollima's The Big Gundown, but far less successful (both literally and metaphorically). It's offers a lively mix of violent spaghetti western action and comedy but never rises above its self-imposed genre limitations. It's a decent movie for those who like the genre, others will no doubt find it tedious.

Westerns of the manhunt type are almost by definition episodic in structure, and therefore need a meaningful background to tie the different set pieces together. The Big Gundown is a tale about class struggle as well as a deconstruction of the mythology of the law-upholding gunslinger; in Shoot, Gringo, Shoot the events and character development (the antagonists slowly learning to like each other) seem to take place in a vacuum: for most part the narrative meanders, with not too much happening other than Fidel running away from Stark and the two men running away from others. But it's beautifully shot, with excellent use of the Spanish locations (1) and the violent finale at the Gutierrez ranch is well-handled, with some visual effects (reminiscent of the final shootout of Massacre Time) that even make those familiar scenes with men falling from great heights look fresh. The younger Corbucci also scores with a couple of bizarre trouvailles, worthy of a Sergio, such as Morini using a melon as a silencer for his gun and a crucifiction scene similar to the crucifixion scene in Johnny Hamlet (rather than the one in Keoma).

Bruno Corbucci was one of the most prolific screenwriters of the Italian post-war movie industry; as a director, he was mainly active in the comedy genre. The comedy in Shoot, Gringo, Shoot often borders on parody, or even slapstick (the madman has pet duck!). Keenan Wynn showed up drunk in Rome and according to several people involved in the making of the movie, he remained tipsy during the entire production, but seemed to sober up a little when mounting a horse (2). Brian Kelly had played 'pa' in the TV-series Flipper and was one of the many television actors who crossed the ocean to play in a spaghetti western. Fabrizio Morini appeared in various genres but was best known to Italian audiences for his performance as Steerforth in an adaptation (for Italian television) of Charles Dickens' David Copperfield. The two play very well together and some have noticed homosexual overtones in the final scene with them riding off together.

Flipper was a TV-show aired in many countries between 1964 and 1967. The title character was an unusually intelligent dolphin - sometimes called the aquatic Lassie - that served as a pet to a game warden (of a fictional National Park in Southern Florida) and his two sons. The show was based on 1963 feature film with the same title in which Chuck Connors (who'd also make the trip to Europe) had played the father. Kelly had already taken over the role of 'Pa Flipper' in a sequel.

Kelly had served the US marine Corps during the Korean War and had studied law at Michigan University, but his exceptional good looks drove him towards modeling and acting. In 1970 he had a motorcycle accident on the set of the movie The Love Machine. It left his left arm and leg paralyzed and ended his career as an actor. In 1982 he served as executive producer on Ridley Scott's Blade Runner.