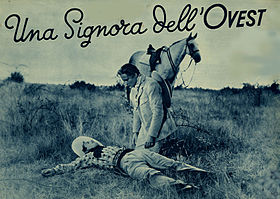 Supposedly the first full length western ever made in Italy. The story, based on the Belasco play, tells the tale of a young saloon dancer who inadvertently gets romantically involved with the man who killed her husband and framed her recent lover. She accepts his advances until she learns the truth. She then returns to her lover and discovers that he has been married all along.