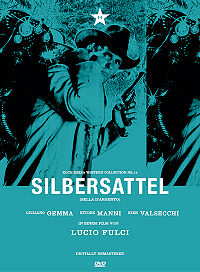 In the opening scene we see how a ten year old boy watches how his father is shot by a professional gunman, paid by a certain Barrett. The boy takes revenge by shooting the hired killer with his father’s shotgun and stealing the man’s beautiful silver saddle. Some twenty years later he has become a famous gunman who calls himself Roy Blood. He is still looking for the man who was responsible for his father’s death, Mr. Barrett. While in town he’s asked to do a professional killing; his gun is not for hire, but he changes his mind when he hears the name of the victim is Barrett. On the churchyard, where he’s supposed to do the killing, the intended victim turns out to be a ten year old boy … Made in 1978, Silver Saddle is often called the ‘last spaghetti western’. It was a compromise movie: director Fulci wanted to make an ultra-violent western, Gemma had a family movie in mind. The violence is more graphic than in most spaghetti westerns from the sixties, but several parts are rather mellow in tone. Geoffrey Lewis steals the show as Two-Strike Snake, a scavenging good-for-nothing who steels from the dead, and there are some nice cameos for genre veterans like Donald O’Brien and Aldo Sanbrell. All in all this is fine spaghetti western, a nice conclusion of a great genre.

Image & Sound: Koch media has done us a great favour with an excellent release of this little gem. The film is presented in the original aspect ratio of 2,35:1 and the image has been anamorphically enhanced for widescreen TVs. Occasionally the image is a little soft, and watched on one of those elephantine screens, some shortcoming may become visible, but overall this is a very good presentation of a thirty year old film. Watched on my 32’’ screen, image quality seemed nearly perfect, with strong colours and good contrast rates. There are three audio tracks, German, Italian and English, all Dolby Digital 2.0 Mono. Neither of them is really impressive. The English track is passable at best, actually I had to strain my ears to understand some of the dialogue. There are only German subtitles.

Extras: Apart from the Italian trailer, a photo gallery and the German credit sequence (with colours that are so awful they really hurt the eye), there are two featurettes, both in Italian with only German subtitles. The first one, “Back in the Saddle”, is an interview with one the composers of the soundtrack, Fabio Frizzi, who is one of those Italians who can talk the hind legs of a donkey. For over twenty minutes he talks about his the theme song, the movie, other movies, other soundtracks (and God knows what more). The second featurette, “A Lifetime in Editing” is an interview with cutter Bruno Micheli, who talks extensively about his work with Fulci, both as a cutter and as a producer of sound effects. Micheli’s an older man who swallows nearly all his sounds, and I suppose only native speakers are able to understand more than half of what he says. It’s nice to hear how films were made some thirty years ago, still I found neither of the two interviews particularly stimulating. However, I must admit that I’m not a real expert on Fulci’s work and I suppose his fans will be more pleased with Micheli’s anecdotes. 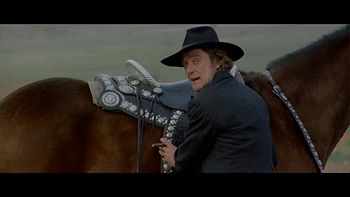 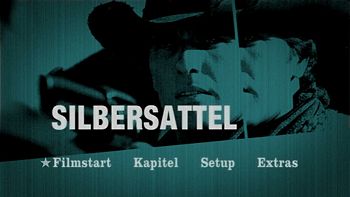 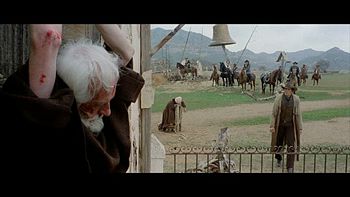