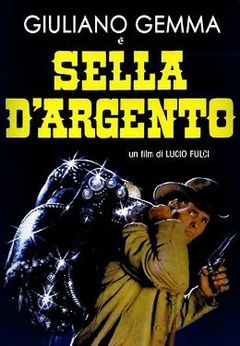 Released in ’78, when the Italian film industry already seemed to have buried the genre, Silver Saddle is often called the last real Spaghetti western. Because most people involved in the project realized it would be some kind of funeral rite, Duccio Tessari was asked to contribute to the script. Tessari had co-written the first ‘real spaghetti western’, A Fistful of Dollars, and it therefore looked reasonable that he would co-write the last one too. However, Tessari’s name is not on the credits and Adriano Bolzoni, who’s accredited with both story and screenplay, sustains he did all the writing on his own (1). Still the opening scene will remind some of A Fistful of Dollars: it’s about a family torn apart and a boy being mistreated (his father is shot before his very eyes), but instead of weeping helplessly the boy defends himself (he shoots the murderer and steals his beautiful silver saddle) and becomes the film’s protagonist.

Some twenty years he has become a famous gunslinger called Roy Blood and the silver saddle has become his distinctive mark. He is followed by a sneaky drifter, Two-Strike Snake, who has recognized the silver saddle and decided to join Roy Blood in order to scavenge the victims behind his back. In town Snake is addressed by a man who wants to hire Roy Blood for a professional killing; initially Roy refuses, but he changes his mind when he’s told the name of the victim: Barrett. The professional killer who shot his father, was paid by a man who was also called Barrett ...

Until that particular moment, Silver Saddle had been a worthy conclusion of the genre, a richly textured western story, bursting with action, part serious, part tongue-in-cheek. Geoffrey Lewis deliciously hams it up as the scavenger named Snake in his second spaghetti western (the first being My name is Nobody). But in a scene remarkably similar to a scene in Giulio Petroni’s Night of the Serpent the intended victim turns out to be a child. The tone changes after the kid's appearance and the film takes a more mellow turn.

Silver Saddle was very much a compromise movie, and it shows: Fulci wanted to make a western that would outdo all other westerns in violence and brutality, but Gemma preferred to make a film for the whole family (2). Fulci wasn't happy with the final result and his sour comments haven't done the reputation of the movie any good. It's not of the Great Spaghettis, but it’s a very likeable one. Because the movie is a compromise, it largely falls between two stools: it’s not particularly violent for a Fulci movie, but the violence is more graphic than in most spaghetti westerns of the previous decade; it’s also not really a family film, but some parts are covered with some kind of Disney syrup: in this universe a prostitute is not only a tart with a heart, but she’ll also melt away from the sight of a ten year old boy with blue eyes and blond hair. Luckily the film eventually picks up the grittier tone of the first thirty minutes, when Fulci decides it’s high time to kill some priests and to blow up some Mexicans. Now that’s more like it.

French author Giré thinks the script is a bit too tortuous for its own good (3). Silver Saddle is basically a thriller (who is trying to kill the child and why?) and there are quite a few twists and turns, but very little tension is created with them. But the movie is beautifully shot, the action is great and I liked the interplay between the suave (but lethal) Gemma and the sneaky (but God-fearing) Lewis. And yes, I even liked the score and the cheesy theme song (admittedly used a few times too many). Fulci originally wanted Tomas Milian for the part of Snake; no doubt he would have been an excellent choice, but Lewis simply does a tremendous job. If anybody was meant to play a character named Snake … There are nice cameos for genre veterans like Donald O’Brien, Ettore Manni and Aldo Sanbrell; beautiful Lentini on the other hand, had no prior experience with spaghetti westerns, but she deserves a place among the great madams of the genre. Apart from the references already mentioned, there’s an early scene with Gemma shooting a hole in a dollar, echoing one of Gemma’s first westerns One Silver Dollar, and a pretty bizarre whip scene, with Sanbrell threatening to beat the living daylights out of the kid (and the viewers), which seems to refer to the infamous whipping of Franco Nero in Fulci’s own Massacre Time.

Retrieved from "https://www.spaghetti-western.net/index.php?title=Silver_Saddle_Review&oldid=106486"
Categories:
Cookies help us deliver our services. By using our services, you agree to our use of cookies.