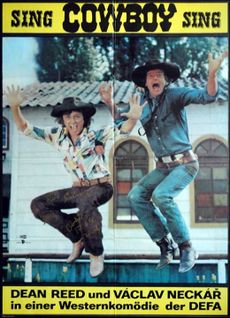 American singer Dean Reed wrote, directed, and starred in this story about Joe, a singing cowboy, who inexplicably does things like sleep with boa constrictors and wrestle pigs when he is not warbling songs for appreciative audiences. A popular Czech singer, Václav Neckář teams up with him as an able and melodious sidekick.

Retrieved from "https://www.spaghetti-western.net/index.php?title=Sing,_Cowboy,_Sing&oldid=95513"
Categories:
Cookies help us deliver our services. By using our services, you agree to our use of cookies.