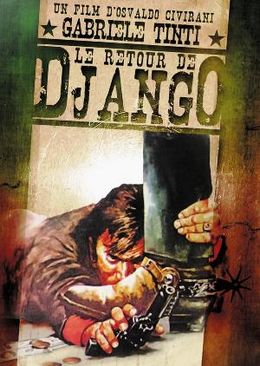 In spaghetti westerns names can be as deceptive as the lip movements of the actors. The name Django in the title usually means there's no Django in the movie. Is this different for the son of Django? The first thirty minutes shed no light on this problem. In fact they offer no clue at all about who is who or what's going on. We first get a shootout in a Mexican town, then we follow a guy wandering around on his own: his horse is stolen, he's taken for somebody else, thrown in jail, breaks out of it again and ... all of a sudden he rides into a western town and a warm voice starts singing a catchy song called They called him Django.

The song goes like this: They called him Django, and he was a friend of mine.

A friend? Not your father?

On his way to town, the guy (we know by then he's called Jeff Tracy) was told about a range war between two powerful ranchers, Clay and Thompson. Apparently the name Thompson rang a bell. A flashback tells us that Jeff is indeed the son of Django: his father was shot before his very eyes, but it happened in the dark and he wasn't able to recognize the face of the killer. However, the last word his father uttered, was the name Thompson ...

The problem of these type of spaghettis about a town disputed by two rivaling factions, is that they need a few complications or subplots to give the story some momentum. A Fistful of Dollars had the subplot of the holy family and the rivalry between No Name and Ramon, A Pistol for Ringo had the hostage situation and the romance between the older patriarch and the outlaw girl who felt honored by his chivalrous attentions. Son of Django has very little to offer in this aspect. There are a few colorful characters, such as a French card sharp called 4 Aces and a widow who seeks revenge for her murdered husband, but they make no more than brief appearances and have little or no impact on the storyline.

And a priest, a gun-toting priest

The best shot at a diverting subplot is Guy Madison's gun-toting priest who was once a friend of Django. Recognizing the son of his murdered friend, the priest decides to buckle his gun belt for one last time and help the young man. He's by far the most interesting character of the entire affair but his scenes feel a little detached from the rest of the movie. My idea was that I was watching a patchwork movie, using material from several (probably unfinished) movies to make one spaghetti western. Tito Carpi is mentioned as one of the screenwriters, and maybe he was asked to tie up a few loose ends. But then again maybe they just ended up with a fragmentary, disjointed script. It happens.

Surprisingly, the film is not a total bore. It may be disjointed but some of the individual scenes work quite well. The shootout near the end is furious and has at least some good stunt work on display. Tinti is not a great actor (he's best known for his roles alongside his wife Laura Gemser in a series of Emanuelle movies) but he has a great spaghetti western face and those erotic movies apparently taught him how to put an arrogant look on his face: Look here, I'm Django's son and Laura's husband (indeed: not bad for a second rate actor). Daniele Vargas is quite convincing too as the overweight crook with guns hidden in the most unexpected places. Piero Umiliani's score is nice and this song They called him Django is wonderful, but there's also a musical interlude with a saloon girl that is pretty horrendous and serves no purpose at all.