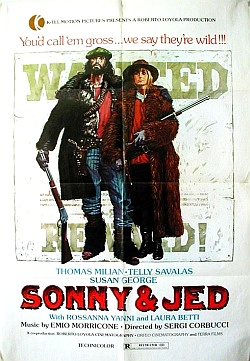 Jed Trigado is a Robin Hood esque outlaw who robs the rich to help the poor. He is being pursued by Sheriff Franciscus "The Bull". Fate puts Jed in the path of Sonny who dreams of the outlaw lifestyle. Jed begrudgingly takes Sonny on and a hate love relationship ensues. In that order. Though ultimatley, more of the first.

Sergio Corbucci could easily deliever masterpieces in the late sixties. But after the deterioration of the fruitful partnership between himself and the great Franco Nero, Corbucci's career went on the downslope. Though not in any way a really bad movie, Sonny and Jed shows signs of fault. As do his next two and final westerns.

Sonny and Jed is a western take on the popular Bonnie and Clyde myth. Therefore, the focus of the film is on the relationship between Sonny and Jed. But instead of having the two companions meet with love at first site, Corbucci decided to focus on the devlopment of a relationship that somehow forms through shovenism and sexism. This does make for a very interesting and cruel relationship. Jed treats Sonny like dirt. But this also makes the relationship all the more preposterous. But there are "checkpoints" in the film where the couple seem to start anew and actually love each other. Satisfying the audiences need for true romance instead of a depressing strained relationship.

Like seeminly all Corbucci films, this film is heavily political. Though you might not notice it on a first viewing as it is heavily disguised by the focus on the two bandits. Jed fights for the poor out of hatred for the rich. Though his characteristics might lead you to believe he is a greedy bandit, he is anything but that. He either sells his loot or gives it to his beloved Mexican village which he regularly donates to and visits. These peons are under strain from a rich landowner who sends gunmen to the town. Jed gives the villagers a machine gun to use in emergency but the good natured peasants do not believe in violence. Jed is a freedom fighter of sorts. This political set up can be seen in countless Spaghettis and is reused rather vividly here.

One claim this film holds in the Spaghetti Western genre is the amount of swearing in contains. In the Italian language version of Companeros, Corbucci added a lot of this vulgar language to emphasis the vulgarity of the times and the lowly characters. Here, Corbucci puts it into the English language for the same effect along with comedy. While Sonny and Jed are traveling in the desert, they spy cow poop. "It's cowshit." "Don't be so fucking vulgar!" "You have a vivid imagination." "Fucking aye I have a vivid everything!" At times, the intensity of a scene is made all the more intense with the strong language. It is timed perfectly for the best effect in this film. You here swearing in all Hollywood films today but they don't have the same effect as hearing them used properly in a Spaghetti Western. Beside the swearing, much of the dialogue comes straight from the 70's. When Franciscus is chasing Jed, he stops to ask a man if he has seen anyone "...wearing a freaky cap?!" Not a normal western vocab word. The use of the word punk can be heard often. "Your not gonna die that easy....Punk!" There is also a dude in their. "Those are two dudes with swords!" Also relating to the 70's are the fury costumes that often resemble Super Fly coats. Especially Savalas's and George's. Definetly a prodcut of the times.

The acting is phenomenal on this film. Tomas Milian was cast to perfection as the vulgar, mean, and rather unlikeable Jed. His meaness is completely believeable. Susan George is also cast perfectly and gives on of the best female performances in a spaghetti Western. But in her lies the films major distance from the rest of Corbucci's work. Leaving his usual style seemingly absent. Telly Savalas is a good villain. But his lack of screen time and lack of developement is one of the films flaws. Some have said he is still in Kojack mode. He is blinded during the second half of the film and is a rather pitiful villain and you end up feeling sorry for him.

Corbucci's direction is steady and rather slow paced. He handles the character development greatly but the moments of reconciliation between the two lovers seem very unrealistic. The few action scenes are pure Corbucci at his best with the normal shacky cam, rapid editing, and wild gunmen oing on a rampage. Corbucci can makes the killing of 4 men into the film's climax and does it succesfully. Great direction.

The maestro delievers one of his patented slow paced 70's western musical scores. He uses slow banjo lucks, strings, and the I Canori. handling the normal Morricone chants. Not one of his better scores but superbly constructed and fits perfectly with the pacing, vibes, and scope of the film. Though I don't know why the musical lyrics focus soley on Sonny.

A flawed but thoroughly enjoyable effort form the Spaghetti Crown Prince, Sergio Corbucci. The ideas are fresh, the acting and casting is perfection in a film canister. Leisurly paced but not boring. Great characters but a rather mean and unlikeable hero. But he's fleshed out too. Maybe not as good as Arthur Penn's violent classic but a great homage to the infamous duo. Sonny and Jed.