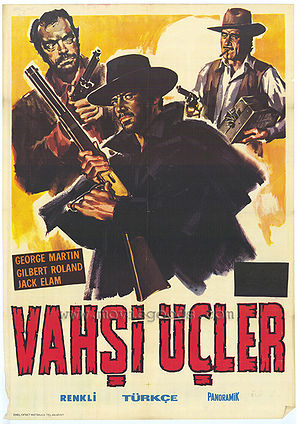 Uriah/Sartana is out to settle an old score with a marauding outlaw, Slim Kovacks. While on the vengeance trail, Uriah runs into an old friend, Kirchner. These three gunmen soon face each other through a battle of wits and guns while trapped in a town taken over by Kovacks and his gang. To make things worse for Uriah, his friend Kirchner, has offered to be Kovack's bodyguard.

One aspect I often overlook while watching Spaghettis is the actual spaghetti atmosphere. But in reality, there are rather few Spaghettis that have pure Spaghetti atmosphere (don't misinterpret that). But the main selling point, for me, on Sonora was the claim that "...the Spaghetti atmosphere is so thick, I could taste it." And now that I've seen it, I can also reinforce this statement. This is, perhaps, the most Spaghetti of all Spaghettis. Right up there with Leone's Once Upon a Time in the West. And while certainly a lesser film, the link between the two films is actually very uncanny (don't misinterpret that either). They both feature a rather leisurely pace, both feature a gunfighter villain with many men at his disposal, silent hero, strained friendships, and little dialogue. But don't think that there is any real comparison overall. Once Upon..... is light-years ahead of most Spaghettis.

Anyway, I enjoyed the film's very strong sense of Spaghetti style and atmosphere. The film is chalked full of squinty gunmen, little talk, more shooting, and the characters knack of having entire conversations without words (they prefer to blow smoke in each others faces, step on boots, slap, etc while coldly staring into each others eyes). It's almost a little hard to describe. But the film is so steeped in this stylization, it borders on self-parody. A typical Spaghetti plot involves a formerly happy man whose woman is killed. He then becomes a vengeance seeking gunman. This is taken to the next level here where, in a wordless, glossy, fluffy, flashback, we see our hero frolicking with his woman, happily. Almost cartoonishly. Everything is simplified and more expressive both visually and contextually. And by the end, I felt as if a gigantic weight were taken off of me. It seems the stylish film was almost a little too stylish for me.

The film is quite slow in pace. We have some good gunfights and fistfights. But one thing I, like others, enjoyed were the Russian Roulette duels the characters had. Though you know how they're going to end, it's still a nice addition. This is just one more stylized trick the film has up its sleeve. A little gimmick. 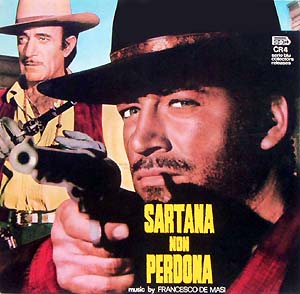 One of the genre's dream casts is assembled for this one. We have the typical Spaghetti actor, George Martin, as the hero. But we also have Mexican actor Gilbert Roland and US actor Jack Elam. Two legends of American cinema. Martin's performance goes with the feel of the film. Nearly self-parodic in his Spaghetti anti-heroness (sweaty, squinty, silent but deadly). Roland plays the same performance he does in other Spaghettis. The cool friend who knows to stay calm in a situation. Elam doesn't even have to act, he just has to be Elam. Of course his facial expression is exploited to be even more ugly, another one of the film's more visually expressive touches.

Balcazar's direction is very fluent. He stays with the same feel throughout the entire film, save for the flashback. His pacing is perhaps a little too slow but fitting for the film on a whole. He manages to muster up a very Leonesque feel to the film while still being at a fairly safe distance away from the copy cat. Sure, that comment is tossed around a lot but here I really mean it, though more of a poor man's Leone. Slow and stylized. But with more action. De Masi's score is typical de Masi. Raoul singing with a good backup beat. Sort of reminds me of surf music. Though only me I'm sure.

A rare one that is deserving of the top DVD release, Koch. But unfortunately, we'll all have to settle for an English subbed, Spanish language, Australian VHS rip. Too bad. --Korano 17:54, 14 November 2009 (UTC)