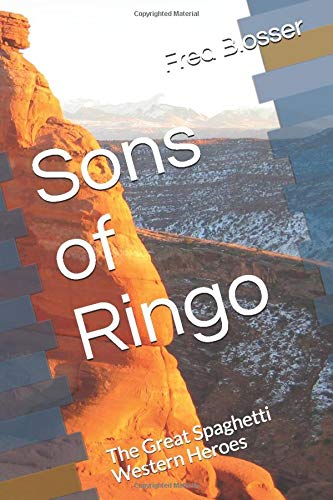 An informal Readers Guide to the pistoleros, bounty hunters, mercenaries, and desperadoes of the Italian Western

A word about Sons of Ringo: The Great Spaghetti Western Heroes:

Una volte in Occidente . . . c’erano pistoleros d’oro! Once in the West, There Were Men with Golden Pistols!

Sons of Ringo celebrates the gunslingers, bounty hunters, mercenaries, and badmen who galloped through movie theaters around the world in the great Spaghetti Westerns of the 1960s and beyond.

Some of us came to the genre as fans decades ago. But casual filmgoers may have heard of it only in the past year, in Quentin Tarantino’s Once Upon a Time . . . in Hollywood, when Leonardo DiCaprio’s character Rick Dalton stars in a Ringo movie by Sergio Corbucci. What better time to provide newcomers with an informal, personal guide to Spaghetti Westerns, and to share this enthusiast’s impressions of the good, the bad, and the offbeat in Italian Westerns?

Following an overview of the genre in its arc from the early 1960s to the late 1970s, with stops beyond, I discuss selected films from Leone and Corbucci, highlight the Sabata movies of “Frank Kramer” (revising and expanding thoughts from an analysis on the “Cinema Retro” blog from a few years ago), explore the best Italian Westerns of Lee Van Cleef, spotlight the “Fourth Sergio” (Martino), revisit the Revolutionary Mexico of Franco Solinas, and survey noteworthy films that should be better known to casual viewers.

You may or may not agree with me that Corbucci’s Johnny Oro, aka Ringo and His Golden Pistol, deserves serious discussion as fully as The Great Silence does, or that William Berger’s Charley Siringo is the pivotal character in Sergio Sollima’s Face to Face, not Gian Maria Volante’s Brad Fletcher or Tomas Milian’s Beau Bennett. But that’s all for the best. We fans are an opinionated lot.

The author has reviewed many spaghetti westerns for Cinema Retro's blog, for example BluRay release of Hellbenders by Kino Lorber or that of The Specialists. In 2014 he took a closer look at the Sabata films.

Retrieved from "https://www.spaghetti-western.net/index.php?title=Sons_of_Ringo:_The_Great_Spaghetti_Western_Heroes&oldid=124589"
Category:
Cookies help us deliver our services. By using our services, you agree to our use of cookies.