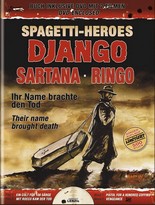 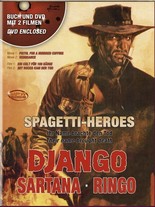 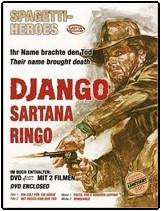 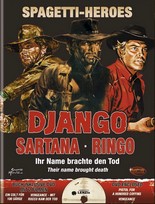 Chronicling the 3 heroes of the Spaghetti Western: Django, Sartana and Ringo. Hundreds of full color stills, lobby cards and posters of Spaghetti Westerns along with full plot summaries, reviews, commentaries and cast / crew details for films from the early days of the genre through it's glory days.

The book is split into 3 main parts detailing the Django, Sartana and Ringo films along with their many offshoots. Full German and English text is included along with a DVD for Umberto Lenzi's A GUN FOR ONE HUNDRED GRAVES. A true must have for fans of not only Spaghetti Westerns, but also aficionados of European Cult Cinema.

Cult filmmaker Umberto Lenzi directed this peculiar, horror-tinged spaghetti western starring Peter Lee Lawrence as The Kid, who is imprisoned for a crime he did not commit. Upon his release, The Kid must attempt to clear his name but is betrayed at every turn by Garff (John Ireland), his former partner. Most of the film, however, deals with a prison escape by a group of raving lunatics â€” led by genre veteran Eduardo Fajardo â€” who charge into town swinging axes and gorily murdering many of the residents.

"Despite its incredibly high price I went ahead and ordered this from xploited. I just got it. It is fantastic! Page after page after glossy page of photos and graphics. I have not read any of it yet (it's in English and German) but just based on how it looks, it is a great book. Not quite as large in format as the Glittering Images, Western All'Italiana books (but very close). But it is even better than the Western All'Italiana volumes in terms of graphics (and they are the best books on spaghettis that I have seen)! This book focuses, obviously, on the Django/Sartana/Ringo movies only. So...re-finance your homes, sell your children, take up bank robbery, but get this book!" - Romaine Fielding

Retrieved from "https://www.spaghetti-western.net/index.php?title=Spaghetti_Heroes:_Django_-_Sartana_-_Ringo&oldid=116549"
Category:
Cookies help us deliver our services. By using our services, you agree to our use of cookies.