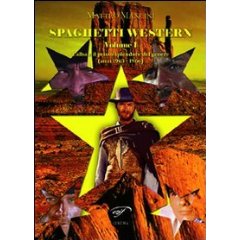 The book is paperback, in Italian only, 415 pages long and the book is roughly 6”x8 ½” in size. The book is going for around 18 pounds.

It has no pictures, posters or drawings which detracts from its content somewhat. If you are familiar with Marco Giusti’s Dizionario Del Western All’Italiano you’ll be more familiar with what I’m talking about. After a brief preface Matteo discusses the origin of the genre starting with The Buffalo Bill Wild West Shows, The silent and pre-1960 Euro-westerns, pulp magazines and cartoons, Zorro films, Sauerkraut and Chorizo westerns.

Matteo then begins to discuss the early Italian westerns 1963-1966 by year. He mentions a few main westerns from a particular year with a listing of producers, writers, cinematographers and composers and a list of half a dozen main actors. He mentions their character names only in his discussion of the plot and then talks about each main film discussing actors and directors and their contribution to the genre and sometimes Italian films in general. He includes other Italian westerns from that same year in a general discussion over several pages but not individually which is what I was hoping for. I would have preferred a layout more like Giusti’s or even our own Spaghetti Western Data Base. He rates the main films by one to five stars and mentions others feelings on the films including Giusti and myself (although I was never contacted by him about my feelings or ratings on the films) so where he came up with the quotes is beyond me.

In conclusion if you can read Italian it might not be a bad read and to get another perspective on our favorite genre. If not it won’t be of much use to you as far as researching or exploring the genre for information or new facts. On page 410 is a list of 14 internet sites he has listed which might be of some interest to people. His index is only on the main films mentioned no index of names is referenced.

P.S. I contacted Matteo through Facebook today and was told he will begin writing Vol. II in September of 2012. The second volume will cover films from 1967-1970.

Retrieved from "https://www.spaghetti-western.net/index.php?title=Spaghetti_Western:_Volume_1&oldid=107819"
Category:
Cookies help us deliver our services. By using our services, you agree to our use of cookies.