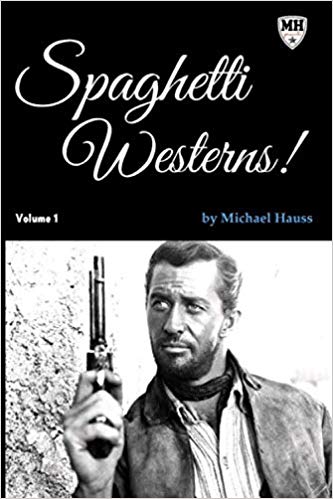 A series of books devoted to the Italian western genre. Books that look at and beyond the Sergio Leone westerns. Chock full of Interviews, reviews and photos. Saddle up with Spaghetti westerns for a read that celebrates the genre as a whole. The Italian western films sometimes referred to as "Spaghetti Westerns," was a genre of films that started as copies of Hollywood westerns but when A Fistful of Dollars was released onto the market, the genre took on a life of its own. And like the countless bounty hunters out looking to get rich on the heads of the bounties, so were the film producers looking for their fistful of dollars. And while initially dismissed as inferior product during its official genres life span; the genre has now began to be critically reappraised. This first issue of Spaghetti Westerns! is not a genre overview or all encompassing, its more of random shots that celebrates the genre, one film at a time.

Michael Hauss is the author of several reviews for Monster magazine, We Belong Dead, Multitude of Movies, Divine Exploitation and blogs that includes Multitude of Movies, Theater of Guts and the SWDb. He has a love of film with particular interest in the Spaghetti Western and Horror genres. Michael lives in the United States where he resides with his daughter and their two cats Rotten Ralph and Fatty boo-boo.
Retrieved from "https://www.spaghetti-western.net/index.php?title=Spaghetti_Westerns!_Volume_One&oldid=122531"
Category:
Cookies help us deliver our services. By using our services, you agree to our use of cookies.