b) The Zapata westerns 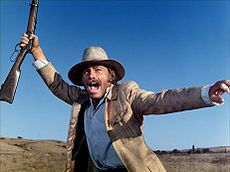 When the spaghetti craze broke loose, in the mid-sixties, Marxism had become a considerable social force in Europe, especially in France and Italy. As said, it was particularly popular among intellectuals (writers, artists, journalists) and students. The works of Adorno, Marcuse, Sartre, Lyotard and Foucault were read and discussed, and many thought a Revolution was imminent. In A Bullet for the General (Quién Sabe , 1966) a young gringo joins Mexican gun-runners who steal weapons for the revolutionaries. He is in fact a foreign agent, sent to Mexico to eliminate a revolutionary leader. Many considered the film as a comment on America’s foreign policy in South America. It also has Klaus Kinski as a revolutionary priest. The film set the tone for a special kind of political spaghetti western, the Zapata westerns, in which the Mexican revolution is used as a substitute for the possible revolution in Europe. The protagonist is usually a European (a gun runner, an arms specialist) who sells his professional skills to the highest bidder, but gradually becomes friends with a revolutionary leader, most of the time a peon, a simple farmer. In both Corbucci movies The Mercenary (1968) and Compañeros (1970) this pattern is respected, still the first one is a rather optimistic film, ending with Nero saving the peon’s life, while the latter is a much darker, pessimistic movie, ending with Nero screaming the line, while facing impossible odds “Let’s go and kill, compañeros”. The reason for this was the failure of ‘May ‘68’, the uprising of Parisian left-wing students of the Sorbonne. Although it wasn’t a genuine revolution, the failure gave many left-wing intellectuals the idea that chances for a radical political chance had gone. In Tepepa (1969), by Giulio Petroni, the theme of betrayal is elaborated, while the revolutionary from the title is shown as a man who isn’t always aware of the consequences of his acts. The peon who becomes a revolutionary hero is often played by Tomas Milian. In Run Man Run he repeats his role as Cuchillo from The Great Gundown, but this time in a revolutionary context. Sergio Leone’s Duck, you sucker! (1971) is a sour comment on both the Zapata westerns and the left-wing ideas of the men who made them. 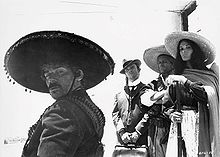 Children of the Revolution

The Risorgimento, the movement towards the unification of Italy in the 19th century, is a very complex historical event, and it would take several pages to explain even the outlines. What is important to us is that it would prove to be more favourable to the industrial North than to the rural South. The opposition between a richer, industrial North and a poor, rural South is felt even today, with enormous unemployment rates in certain southern areas (occasionally up to 60 % for younger people). It was no doubt important for the popularity of the already mentioned Civil War westerns among moviegoers in the southern Italian provinces. Those movies often presented a man from the countryside, a farmer, as the hero, while the town was depicted as a hostile place, dominated by corruption. It was also of importance for the growing power of Italian crime rings like the Mafia, Camorra and n’Dragheta. In Italy they are often referred to as ‘Cosa Nostra’ (= Our Business); the idea behind this is: we can’t trust the authorities, so we take care of our business ourselves. Of course these crime rings are engaged in things like drugs and gun running, but their main interest is to exercise control over local politicians and other dignitaries. Usually they try to appoint their own people or to influence residing politicians, judges or police officers by blackmailing or threatening them. This is reflected in a type of spaghetti western in which dignitaries usually function as villains. Unlike the Zapata movies these films do not transmit a political message or take a political stance. They simply reflect some rather typical Italian ideas about politics and society.

The Price of Power: Kennedy out West

One of the most outspoken movies of this type is Giulio Petroni’s Death rides a Horse (1967). In the horrifying opening scene we see how a family is butchered by five men. Fifteen years later, when the only survivor of the massacre is preparing his revenge, these men have become respected citizens, who control local authorities. In Django the Bastard the theme of corruption is linked to the theme of betrayal in wartime: a group of southern officers have betrayed their men, who were subsequently slaughtered. After the war, they have become important men, local tyrants, as ruthless as they are powerful. In Sabata (1969) Lee van Cleef is rewarded for recovering the money of a bank robbery, but then discovers that those responsible for the heist were three respectable men, a judge, a saloon-keeper and a rich land owner. Van Cleef’s Sabata is dressed in black, traditionally the colour of the ‘bad guy’. The black clad of the ‘hero’ of course mirrors the deceitful appearance of the villains. Another ‘good guy’ wearing black is Sartana, usually played by Gianni Garko. In I am Sartana, your Angel of death (1969) we see Sartana cleaning up the western town of Poker Falls, a Las Vegas avant la lettre, dominated by crooks. Both the Sabata and Sartana movies are strongly tongue-in-cheek, but their view of life is pretty bleak and ugly: they describe a world in which nobody can be trusted. Even the sheriff, in the classic Hollywood western the paragon of virtue and courage, is in this world a marionette or simply a coward: Sergio Leone set the tone for this when he gave Clint Eastwood his legendary line in For a Few Dollars More : “this town needs a new sheriff”.

It seems the Italian sensibilities even shine through when typical American historical and/or political subjects are tackled. Tonino Valerii’s The Price of Power (1969) reshuffles, in western form, some facts about the murder of J.F. Kennedy, but films tend to reflect more the period in which they are made than the period they describe. The assortment of villains responsible for the crime is the typical Italian line-up of corrupt lawyers, lawmen and bankers and most of the dialogue (No gun can ever stop an idea!) sounds more sixties Italian than 19th Century Texas. The presentation of the idealistic president who completely refutes capitalism, is also typically sixties Italian, as attentive readers of this article will confirm. Sergio Leone’s Once upon a Time in the West is of course in the first place an admirable reverie on the final days of the Old West and the western genre, but it’s also a rather cynical comment on the Way the West was finally Won: Morton, mr. Tchoo Tchoo, is shown as a ruthless entrepreneur who hires Frank’s crime ring ‘to remove some obstacles’. Even more significant, and more Italian, is the way the End of the old West is described: to Leone the end of the Wild West is marked by the establishment of the matriarchate – it’s Claudia Cardinale who’s in control when the outlaws, gunmen, sheriffs and the Last Hard Men have outlived their time. Mamma mia! 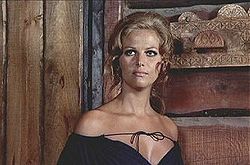 Retrieved from "https://www.spaghetti-western.net/index.php?title=Spaghetti_Westerns_and_Politics,_part_2&oldid=113406"
Category:
Cookies help us deliver our services. By using our services, you agree to our use of cookies.