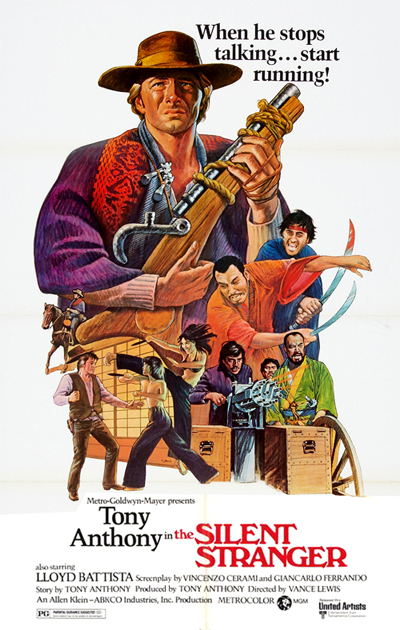 The Stranger, the nameless hero, is asked by a dying Japanese in the Klondike to deliver a scroll to a man in Japan. Trying to do so, he is involved in a Samurai war.

At a time when the Spaghetti Western started to tire itself out, thank god we have people like Tony Anthony to bring some much needed change to the genre. And if you couldn't guess by some of the titles, it's set in Japan. And filmed with loads of Tony Anthony charm and entertainment. // by Korano

The Silent Stranger takes the formula of the previous Stranger films, and by transplanting it to a Japanese setting with Samurai instead of gunmen, it somehow brings the genre back to its Kurosawa inspired roots. Tony Anthony garnered for this one a bigger budget, including backing from a large Hollywood studio, which unfortunately in the end backfired. Due to legal quarrels between Anthony's chosen producer Allen Klein and MGM the film wasn't released until 1974, at a time when the fusion of Eastern and Western had just become the rule of the day. Even worse the released version was cut against Anthony's wishes and didn't make any impact then, but there's still hope that Mr. Anthony will one day be able to prepare an uncut version for a DVD release. // by Stanton

Retrieved from "https://www.spaghetti-western.net/index.php?title=Straniero_di_silenzio,_Lo&oldid=140930"
Categories:
Cookies help us deliver our services. By using our services, you agree to our use of cookies.