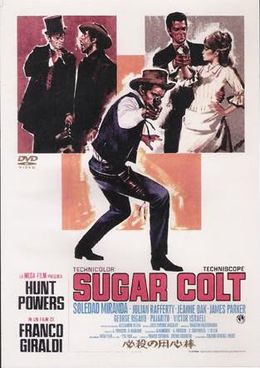 In order to fulfill his uncle’s last wish, a retired governmental agent - formerly known as Sugar Colt - goes undercover as a doctor to investigate the disappearance of a Northern regiment in the town of Snake Valley. He solves the mystery and wins the heart of a young woman in this enjoyable (if occasionally silly) combination of thriller, western and comedy

The second western by Franco Giraldi, best known for his two comedy westerns about the Scottish McGregor family. This one was made prior to the second MacGregor movie, Seven Women for the MacGregrors, but its release was postponed because of the success of the first McGregor, Seven Guns for the MacGregors. Giraldi had a new kind of western hero in mind, not a dirty anti-hero, but a dandy, a debonair gentleman modeled after the secret agents from the numerous spy movies that were being produced all across Europe in imitation of the Bond movies. The American actors working in Rome were all too tough and rough, so he went looking in Los Angeles for an affordable actor who answered the description, and finally came up with Hunt Powers (Jack Betts), best known for appearances in TV series (1).

The story is set immediately after the Civil War. Powers is Tom Cooper, a retired governmental agent formerly known as Sugar Colt. He’s now the owner of the Academy for the Spiritual Freedom of Women, where young ladies are taught how to defend themselves (or to shoot their husbands). It’s an easy job that pays well, so our hero is reluctant to give it up when he’s asked by his uncle to investigate the case of a Northern regiment that has disappeared under mysterious circumstances. Tom’s uncle has reasons to believe the soldiers are still alive and were kidnapped and are being held for ransom, somewhere near Snake Valley, were they disappeared. When his uncle is shot before his very eyes, Tom travels to Snake Valley, disguised as a doctor. With the help of a bugler and two women (a saloon lady and her lovely daughter), he manages to solve the mystery of the missing soldiers.

Sugar Colt received some favorable comments from Italian film critics, but it has never been very popular among spaghetti western fans. Many of them think it’s one of those movies that simply can’t make up its mind whether it wants to be a serious action movie or a comedy. One of them is Phil H; in his review he explains that he has no problem with the combination of drama and comedy, when done properly:

“One word will suffice to describe how this can all work to everyone's satisfaction: Sabata. However, what Sabata and films of its ilk do well is maintain a constant mood of kitsch action. The characters are all a bit larger than life and the drama never goes much beyond the melo variety. For some reason Giraldi never allows Sugar Colt to settle in this territory and the film loses out as a result.”

Both Giraldi’s McGregor movies offered a similar, often confusing mix of broad comedy and brutal violence; the second McGregor - the one about the Seven Women - is basically a comedy, but also has a couple of execution and torture scenes, and a scene with a little girl wandering through the massacred town that is pure horror. Sugar Colt also sways from comedy to violence, but part of the problem is created by Luis Bacalov’s disjointed score; dramatic themes are alternated by wacky tunes that are often played over more lighthearted, but otherwise pretty normal scenes, making them look much sillier than they really are. Sugar Colt is by no means great but it offers a lively mix of tongue-in-cheek humor and tough spaghetti western action. Powers is quite likable as the resourceful detective who shoots straight and hits hard (with his fists) and also knows how to concoct a truth serum; he’s a bit of an odd man out in the spaghetti western universe: some saw a likeness to William H. Macy (2), others think he looks like a George Clooney with bigger ears (3).

The story about the kidnapping of an entire regiment doesn’t seem to make much sense, but may have been interpreted as a political allegory by contemporary Italian viewers (4); believable or not, it’s unfolded in suitable fashion, nicely integrating the double love story into the narrative: the saloon lady is the local tyrant’s old flame and her daughter can’t stand this arrogant klutzy doctor but falls head over heels in love with the elegant gunslinger. Both Gina Rovere (as the mother) and Soledad Miranda (as the daughter) turn in engaging performances. The action scenes are remarkably violent and spectacular (Powers - or his stunt double - making somersaults in the style of Giuliano Gemma), but the extended shootout between the villain and the freed soldiers near the end looks quite chaotic.

A final word on this Bacalov score. It’s not a bad score per se, some of the more dramatic parts have a solemn, ceremonious beauty, but it often feels mismatched, incompatible with the things happening on-screen. And this theme song, sung by I Cantanti Moderni, is a totally ridiculous tune recalling the sound of hoof-beats in the style of Rudolph the red-nosed reindeer.

Retrieved from "https://www.spaghetti-western.net/index.php?title=Sugar_Colt_Review_(Scherpschutter)&oldid=124077"
Categories:
Cookies help us deliver our services. By using our services, you agree to our use of cookies.