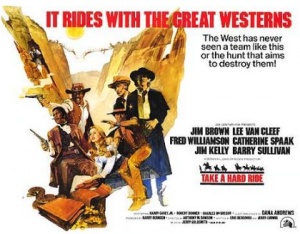 By 1975, the Spaghetti Western was quickly fading into history while the Blaxploitation era was at its peak and almost over as well. Take a Hard Ride could be seen as a swan song for both of those pop genres.

At the opening of the film we meet a bounty hunter named Kiefer (Lee Van Cleef). The introduction of Van Cleef is perfect as the sounds of a harmonica play ominously like a rattling snake. Margheriti spins the camera from below and moves out in front of Kiefer who is sitting on a church's porch. The camera then dollies backwards as it slides right through the center of a fence post. Kiefer finds his target and he kills him after a quick gunfight. Yep, Van Cleef is still the fastest gun in the West!

After the main credits sequence we meet a rancher named Morgan (Dana Andrews) and his right hand man, a trail boss named Pike (Jim Brown). The two have a large sum of money ($86,000) they need to bring back to their ranch near the border of Mexico. Tragically, Morgan has a heart attack but asks Pike to give his word that he'll get the money back to his family and friends so they won't go bankrupt. Pike does and Morgan passes away.

As soon as Pike hits the trail, word spreads like wildfire that he's carrying a big load of cash and every outlaw in the territory begins looking for him. One of the high rollers who plans on catching up with Pike is a gambler/dandy named Tyree (Fred "The Hammer" Williamson). In no time, Tyree finds Pike being ambushed by some bandits, but they get out okay. Tyree makes an offer to Pike to help him get to where hes going on one condition, as soon as they reach their destination, they'll fight it out for the money. Pike needs any help he can get, so he reluctantly agrees and lets Tyree ride along with him. The two run into none other than Kiefer, but instead of holding the two up, he just rides by them.

While on the way back to the ranch, Tyree and Pike meet a prostitute named Catherine (The Cat O' Nine Tails' Catherine Spaak) and her mute, half breed bodyguard-friend Kashtok (Enter The Dragon's Jim Kelly). The group decide to travel together as the more people to help fight off the outlaws on their trail, the better. After Catherine is killed, Kashtok continues to tag along with Tyree and Pike. I have to say, Jim Kelly is a lot better when he's speaking. In this role he just didn't have much to do except the occasional leap from a hill to beat up the bad guys.

In the end, Take A Hard Ride was a bit of a dissapointment for me because I was expecting a real genre classic. There really was no standout performance by anyone. Van Cleef is relegated to constant close ups and is more of a voyeur who moves in and out of the story. Fred Williamson is fun as Tyree and he's probably the most entertaining character in the film. Jim Brown doesn't do much as Pike and is pretty dull overall. The main problem in this film is definitely the writing. It just doesn't hold together and the character of Kiefer played by Van Cleef makes no sense. Throughout the film, you just dont know where he stands. Does he want to help Tyree and Pike or steal the cache of money? By the end of the film, nothing really is resolved between him, Tyree and Pike making Take a Hard Ride a bit of a dust filled dud. --Pete R.

Retrieved from "https://www.spaghetti-western.net/index.php?title=Take_A_Hard_Ride_review_by_Pete_R.&oldid=95427"
Category:
Cookies help us deliver our services. By using our services, you agree to our use of cookies.