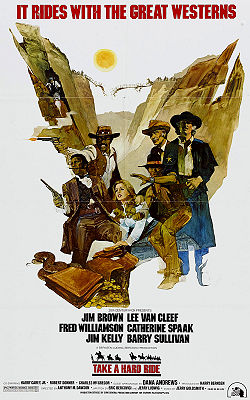 Made roughly a decade after the glory days of the genre, Take a Hard Ride is as much a blaxploitation film as a spaghetti western. With Jim Kelly, fresh from Enter the Dragon, as an Indian (!) martial arts specialist, even a third genre is smuggled in. As a hybrid, the film isn’t very inspiring. Even the Canary Islands locations have an alienating effect, as if there's something totally wrong with the film: you can’t shake the bizarre feeling that it doesn’t belong there. Luckily those locations are beautiful.

Jim Brown is Pike, a black right-hand man of a rancher, who must bring an $ 86.000 payroll over the border after the death of his boss. When he’s attacked by bandits, he’s saved, and subsequently joined, by a fellow black man, Tyree, a dishonest professional card player. The two men head for Mexico, attracting an entire army of would-be thieves, led by Kiefer, a merciless bounty killer, played by Lee van Cleef himself.

Although far from great, the first half of the movie is enjoyable. Brown and Williamson aren’t gifted or versatile actors (Brown is his stone-faced self, Williamson does his usual pimp impersonation), but the contrast between both characters is interesting: the first a sort of Uncle Tom, honest and loyal to his white boss, the other a talkative and manipulative opportunist, only honest to himself. With Jim Kelly and the lovely Catherine Spaak joining them, and Lee and his ever-growing bunch trailing them, things look quite promising, but somewhere half way, it all falls apart. Spaak is killed so abruptly that it took me a while to realize that she wouldn’t return. A machine gun is thrown in, but apparently for no other reason than the presence of a machine gun in The Wild Bunch, obviously a source of inspiration (others, among them the director himself, have pointed at similarities with Butch Cassidy and the Sundance Kid). At a specific moment, Brown and Williamson are confused with two other niggas, who play hide and seek with the movie and then, all of a sudden, like Spaak, are killed off. There’s no coherence, no flow. And no finale. There’s an explosion and a waterfall, and that’s it.

An enjoyable first half, a few decent action scenes (Hal Needham was one of the stunt coordinators), great locations and a nice score by Jerry Goldsmith, that is what this movie has to offer. It’s also nice to see a few Hollywood veteran actors like Barry Sullivan and Dana Andrews. And then there’s Lee, good old Lee, who’s in desperate need of a hair dresser. I’ve never seen him so bored, and above all: so thin; he literally looks emaciated here, almost swallowed by his traditional Colonel Mortimer coat. Ricardo Palacios, playing a Mexican bandit, seems to have put on all the weight Lee had lost.

If the film isn’t a masterpiece, the presentation of it by Koch Media is top notch. Image quality is excellent; the image may be a bit soft, occasionally leading to some smudginess (look at the last screenshot), but colours are strong and there's hardly any visible print damage. The Audio comes in three languages, English, German and Italian. There are optional German and Italian subtitles. I concentrated on the English soundtrack; it does the job pretty well, although I had to strain my ears to understand some of Catherine Spaak’s lines (probably more due to madame's English than the track). The German and Italian audio tracks are of similar, very decent quality, with the Italian track sounding a bit more robust than the other two.

The two featurettes are of course the heart and soul of those extras. The least interesting of the two, is My Father’s Hard Ride, an interview with Eduardo Margheriti, the director’s son (in Italian, German subtitles). Eduardo is mighty proud of his dad, talking about him as if he was at least some kind of Tessari or Sollima. According to Eduardo, Lee van Cleef and his father were close friends with several common hobbies, who often met at Lee’s home in Santa Barbara to spend some time together. The second featurette, The Hammer in the West, an interview with Fred Williamson (in English, no subtitles) is quite lively. Williamson has aged well and has some self-irony. He tells us that the three black actors, well aware of their limitations, all modeled their characters and acting style with a more famous colleague in mind: Jim Brown tried to be a sort of John Wayne, Jim Kelly of course Bruce Lee, while Williamson presented himself as a black version of Burt Lancaster in Vera Cruz. He also says it was decided to turn Jim Kelly's character into an Indian because of his martial arts skills. I don't get that. As far as I know martial arts weren't common in the US in the 19th Century, nor among whites, nor among native Americans. They only became a craze after Bruce Lee's martial arts movies. But okay, that's where Kelly came from.

Thanks to The Stranger

Retrieved from "https://www.spaghetti-western.net/index.php?title=Take_a_Hard_Ride_-_Film/DVD_Review_(Koch_Media)&oldid=108435"
Categories:
Cookies help us deliver our services. By using our services, you agree to our use of cookies.