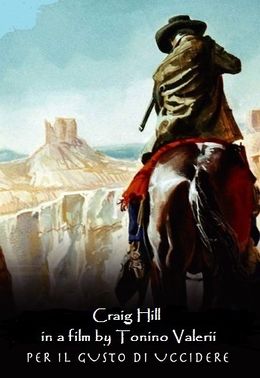 Lanky is a bounty hunter who doesn't chase outlaws but follows money transports, knowing that outlaws inevitably will turn up. After wiping out a gang, he's asked by a banker and a mine-owner to protect their interests against a bandit called Kennebeck, who once killed his brother. This is a fairly good Leone imitation, beautifully shot by Stelvio Massi on locations we've all become familiar with and with lots of faces from the Dollar movies appearing in supporting roles.

The bounty hunter Hank "Lanky" Fellows watches an assault on a money transport from a distance, but doesn't take action when all soldiers escorting the money are killed. The leader of the bandits, Sanchez, departs with two of his men to put the money in a safe place, and sends the rest of his gang to the town, in the uniforms of the soldiers they have just killed. Lanky starts stalking Sanchez and eventually kills him and his men. He then rides into town to return the stolen money to the rightful owners and helps them wiping out the rest of the gang. The banker and mine owner ask his assistance for the protection of a gold transport, against a bandit far more dangerous than Sanchez, a guy called Gus Kennebeck. Lanky gladly accepts the offer, because Kennebeck is the man who has killed his brother years ago ...

Taste of Killing was the first western directed by Tonino Valerii, better known for two other genre entries - often appearing on people's lists of favorite spaghetti westerns - Day of Anger (1967) and My Name is Nobody (1974). Vallerii, who had worked for Sergio Leone on both A Fistful of Dollars and For a few Dollars More, was recommended for the job by Leone himself after the original - Spanish - director had been fired by the producers. It is also said that Leone had come up with the original idea for the movie - a bounty hunter who doesn't chase outlaws but follows money transports, knowing that outlaws inevitably will turn up - but I haven't been able to find any conformation of this.

Taste of Killing lacks the psychological dimension of Day of Anger and the ambitions of My Name is Nobody. It's a more straightforward (if morally ambiguous) action movie. Nevertheless, it is considered by some to be Valerii's best film (1). Personally I'm not sure what to think of it; it's most certainly above average, but there's this feeling that it could've been even better. The first twenty minutes, with Lanky stalking Sanchez and his men from a safe distance, are wonderful. Lanky's rifle, fitted with a telescope, carries further than the rifles of his opponents and he repeatedly shows them how easily he could kill them. Valerii manages to create a nail-biting tension, helped by Fernando Sancho's flamboyant performance as the outrageous but desperate bandit leader. Those twenty minutes may have influenced Don Medford's exercise in sadism The Hunting Party (1971). But afterwards the film never regains the full grandeur of this cat and mouse play. Lanky is offered to protect the bank on a no cure, no pay basis: when the gold will be robbed, he'll lose everything, if he manages to protect it successfully, the money he earned by killing Sanchez and his gang, will be doubled. The story has enough twists to hold your attention, but there are too many characters and too many subplots, probably a result of too many people working on the script (no less than seven are mentioned).

The main character, Lanky Fellows, is analphabetic and nearly completely unworldly, caring more for his rifle than for anything else. He's one of the most fascinating characters from the genre, but his behavior is a little inconsistent: he impassively watches how an entire regiment is slaughtered and shoots people - according to the original Italian title - per il gusto di uccidere that is: for the taste of killing. This all seems to suggest that he is a sadist, but he has a sense of fair play as well: when Martin believes Lanky's rifle is better than his, he proposes to swap them. Lanky's opponent, Gus Kennebeck, is a bit hard to fathom as well: he's not presented as the incarnation of evil; he's bad, but he's not an egomaniac misanthrope: he cares for his girlfriend (the mother of his son) and his girlfriend cares for him. The story progressing, we sense the desire to learn more about these two opponents, but these wishes aren't granted.

Taste of Killing is a violent, spaghetti western, made by a Leone student, not perfect, but very entertaining. It's beautifully shot, by Stelvio Massi, on familiar Almeria locations, with lots of faces from the Dollar movies appearing in supporting roles. There are a few clever references to "A Fistful of Dollars": in this movie one of the villains (George Wang) is severely beaten up, instead of the hero, and the subplot with Kennebeck, his girlfriend (a lovely Rada Rassimov) and their son, almost feels like a mirrored version of the Holy Family, shifted to the villainous side of the cast, with the hero seperating the family members instead of reuniting them. We also get a character modeled after The Prophet from For a Few Dollars More: an old timer observing all procedures from his garret with the help of a portable mirror.

(1) "When first released, I found it wonderful (...) none of Valerii's films, despite their bigger production values and greater success, has ever given me that same impression of freshness" - Marco Giusti, Dizionario Del Western All'Italiana 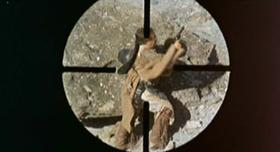 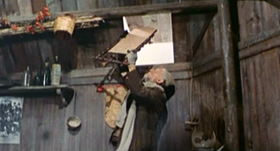 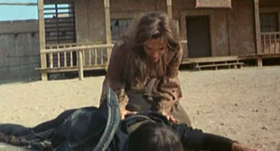