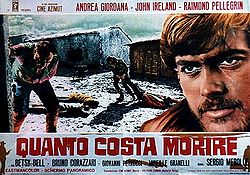 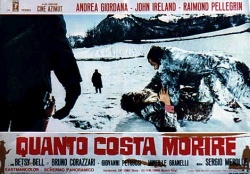 Sometimes called 'the other western in the snow', this film was shot on location in The National Abruzzo Park, north-east of Rome (1). It's the only film directed by Sergio Merolle, who mainly worked as a production manager in the Italian film industry. It didn't make much of an impression when first released, but its reputation has grown and it has developed a small but devoted cult following. The film is often read as a metaphor for the Nazi supported occupation of Northern Italy by Mussolini and his black coats, and the Partizan struggle to chase them.

In one of the first scenes we see Scaife (Bruno Corazzari) approaching four cowboys sitting around a fire, and shoot them without warning. Scaife and his men are soon surprised by the early winter and decide to hibernate in a small village near the blocked mountain pass. The local sheriff recognizes one of Scaife's men, Ralph, who brings back memories of a horrible night, twenty years ago, when both men witnessed the slaughter of several members of the local population. The sheriff is soon killed by Scaife, who forces the locals to watch him die. A young man called Tony, who thinks his father died in the massacre twenty years ago, stands up against the murderers, even though he is certainly no match for them. But then he gets assistance from a repenting Ralph, who gives him an education as a gunfighter. Backed by Ralph - who actually is his real father - he finally organizes the local people in their resistance ...

Due to its setting in a snow-capped mountain area, Taste of Death is inevitably compared to The Great Silence. There clearly are some similarities (as well as differences) between the two movies, like Silver Wolf has pointed out in his comment: Both movies have similar snowy landscapes and sad atmosphere. The Great Silence is about a few righteous men fighting for "the underdogs" against enemies who are clearly superior in numbers and, in the end, the heroes fail. The Taste of Death has a somewhat similar storyline about people being enslaved by a few strong (and violent) men but this time the few heroes who oppose the enslavers, understand that they can't win on their own so they urge the normal townsfolk to "do their own rise" (as De Masi's beautiful theme song puts it) which leads to very different (yet still very tragic) outcome.' (2)

The political reading, proposed by Italian author Federico De Zigno, has now found general acceptance, and certainly explains some of the more talkative moments, with Ireland and Giordana discussing liberty, collaboration and the futility of revenge. When Ireland is talking about the necessity to liberate il paese, this has a secondary meaning for Italians, paese not only meaning village, but also country (!). The days of Mussolini's empire and the partisan struggle, with Italians fighting Italians, where some of the darkest, most traumatic moments in Italian history (3), which is reflected in the down-beat, pessimistic mood of the film, and the way nearly all characters are presented, as described by Silver Wolf: Thematically this film is quite a departure from the usual far-left ideology of spaghetti westerns, where "the people", as a good, collective entity, fight against the strong leaders who are always portrayed as enemies of the average folk. The Taste of Death shows "the people" as conformists and cowards (...) They find their (collective) strength only when some lonely hero, who is clearly more brave and ideological, "inspires" those inferior to him..' The atmosphere is indeed very different from the Zapata westerns, and the film certainly is no glorification of the virtue of the so-called 'common people', but still, by referring to the Partizan's struggle, Merolle most probably wanted to pay honour to his fellow Italians who, outraged and humiliated, finally stood up against the forces of evil.

The last word has not been spoken about Taste of Death; it is still open to debate and new interpretations. But those who do not care for political readings, can sleep on both ears: it works very well as an off-beat western, apart from all references and possible deeper meanings. It's hard to find any negative criticism about the movie. Personally I would say Merolle's direction is rather conventional, leaving some parts of this otherwise compelling movie with a degree of aloofness, while some story elements, concerning Giordana and Pellegrin's daughter, are under-developed. Pellegrin was criticized, but in my opinion he lends an unmistakable dignity to the part of the aging sheriff, struggling with the ghosts of the past. Ireland turns in a fine performance, but the film definitely belongs to Corazzari's Scaife, a character as trustworthy as a lizard and as venomous as a serpent. He is without any doubt one of the great villains of the genre. With tracks ranging from playful and atmospheric to obtrusive and bombastic, Francesco De Masi's score is vintage De Masi. Most people will love it, I didn't. I even found the Raoul song Who is the Man quite forgettable, while I usually keep humming those cheesy songs for days. Benito Frattari's cinematography of the snow-capped Abruzzi hills seemed lovely, but it'll take a first rate DVD release to rate it at its true value.

And that's exactly what this movie needs: a decent DVD release. Several versions exist, with different running times (the longest being an Italian edit of 92 minutes). The only official release seems to be a French VHS, called Les Colt brillent au soleil (The Colts are shining in the sun). The version I saw was a copy from a public showing on Italian national television, running 86 minutes. With a few jumpy moments, and image quality varying from scene to scene, I suppose it was specially edited for TV showings, out of several versions, using the best image quality available for individual scenes.