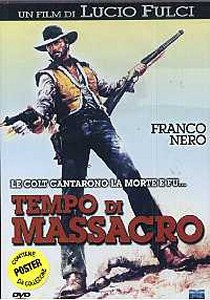 Tom Corbett (Franco Nero), a prospector, is asked by a friend of the family to come home. The family farm is now property of the Scott family, and Tom's brother Jeff (George Hilton) has become an alcoholic, who only seems interesting in his bottle. But when the Indian woman who has raised both men is murdered, Jeff tells what really has been going on all the time, and picks up his gun to assist Tom in his attempt to settle the scores. Director Lucio Fulci's first spaghetti western is rather slow in spots, but the pace picks up with the infamous bullwhip scene and the film has an ultra-violent, hypnotic finale that seems to have influenced John Woo to his balletic shootouts. George Hilton steals the show as a drunk who can shoot straight and knock people out even when he is no longer able to stand on his feet. For a full Film Review, look here.

The DVD contains the so-called 'Seconda versione', which is the longest version available. In order to avoid an '18 rating', the Italian censors had ordered Fulci to make cuts in both the opening sequence (a man devoured by dogs) and the bullwhip sequence, and to remove a close-up of the two murdered Carradine girls. This cut version, with a length of 86 minutes, is called the Prima Edizione. In 1970 the cut scenes were restored. The restored version, with a length of a little over 88 minutes, is called the Seconda Versione.

Video: The Italian DVD presents the movie in its original aspect ratio and the image has been enhanced for widescreen TVs. It is a vast improvement over the bootleg DVD released by DWV, that had bad image quality and was cropped left and right. This doesn't mean it's a great release. The image quality varies a little, it lacks contrast and every now and then scenes pop up with faded, washed out colours (some parts look sepia-tinted), while some of the indoor scenes are a bit on the dark side. Apart from the pre-credit opening scene (taken from a different source?) the image is largely free from print damage. It's a watchable print, but it's far from great.

Audio: Both Italian audio tracks are strong and clear. In fact I didn't notice much difference between the surround and the mono track (apart from the fact that the 5.1 track is louder). The English audio can't keep up with these two tracks: there's some noticeable hiss and the track sounds a bit clinical overall, but it's still more than acceptable. The Italian subs are normal subs, no HOH, so they simply render the Italian dialogue (although not always literally).

Extras: Most interesting of the extras, is of course the interview with George Hilton. It's in (impeccable) Italian, but without English subs. The audio quality is mediocre and there's a lot of disturbing background noise, especially during the first few minutes, making it sometimes hard to understand what he says. Note that it's very well hidden: to reach it, click 'extra', then 'scheda film', then 'George Hilton' (in the written text), then 'intervista'. Hilton, still good-looking, talks about his first steps in acting, in Argentine cinema, his experiences on stage and his glory days in Italian cinema. As a man who saw himself as a 'classical actor', he had never dreamed of making a western, but the offer of the part of the alcoholic in Massacre time, was the chance of a lifetime, and opened all doors in Cinecittà . Along with the westerns Ognuno per sé and A Bullet for Sandoval, and some thrillers he made with Sergio Martino and Giuliano Carnimeo, Massacre Time is still one of his favourite films, in spite of his horrible experiences with director Lucio Fulci. Hilton seems a very likeable person, who talks with great affection about colleagues like Van Heflin, Ernest Borgnine and Edwige Fenech, and directors like Sergio Martino and Giuliano Carnimeo (he talks about them as if they were Alfred Hitchcock and Sergio Leone), but talking about Fulci his attitude changes completely. He said he swore afterwards he'd never work with the man again (and sustains that Fulci did not work on A bullet for Sandoval). But all the time he keeps stating that Fulci was a gifted man who meant a lot to his career. A nice man, this señor Hilton.

This is a DVD with good audio quality and interesting extras, but no more than mediocre image quality. It's not a bad release, but it leaves (quite a lot of) room for improvement (for the upcoming Wild East release?). 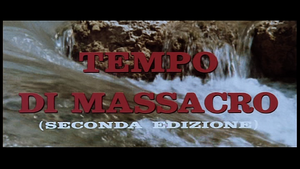 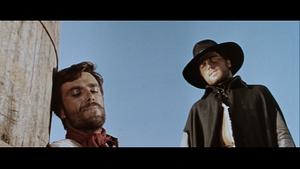 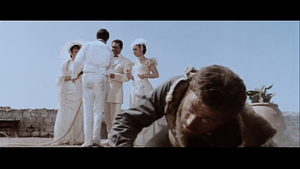 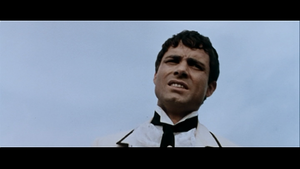 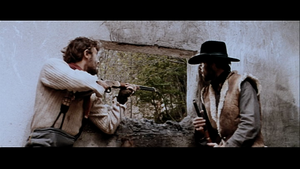 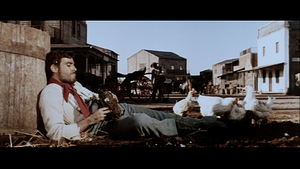 Retrieved from "https://www.spaghetti-western.net/index.php?title=Tempo_di_Massacro_DVD_Review&oldid=74330"
Category:
Cookies help us deliver our services. By using our services, you agree to our use of cookies.