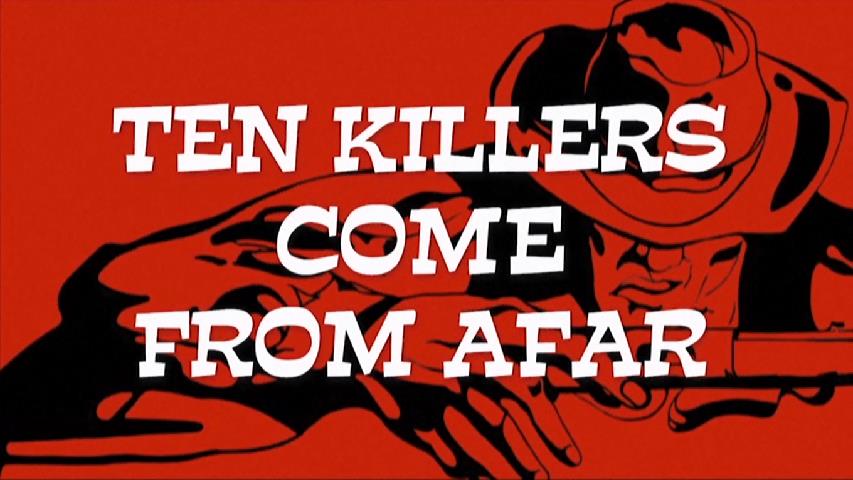 The comedy-western mix in the Italian western genre, had been around for years, before the TRINTY films came along and forever altered the genre, sending it slapping and kicking into its last gasp slapstick go around. Early in the genres cycle, films like For A few Dollars Less (Per qualche dollaro in meno), Ringo and Gringo Against All, mixed the genres. The comedic duo of Franco Franchi and Ciccio Ingrasssia took the genres comedy-western mixes to another absurd level with brilliant at times parodies like Two Sons of Ringo (Due figli di Ringo, I), The Handsome, The Ugly and The Stupid (Bello, il brutto, il cretino, Il) and 2 RRRingos no Texas. The Italian western genre never overly went the comedic route until the popularity of the Trinity films, helped shoot a bit of life into a repetitive, dying genre. For the most part, the films that followed that aped the Trinity formula, are substandard examples and further aided in the collapse of the genre. 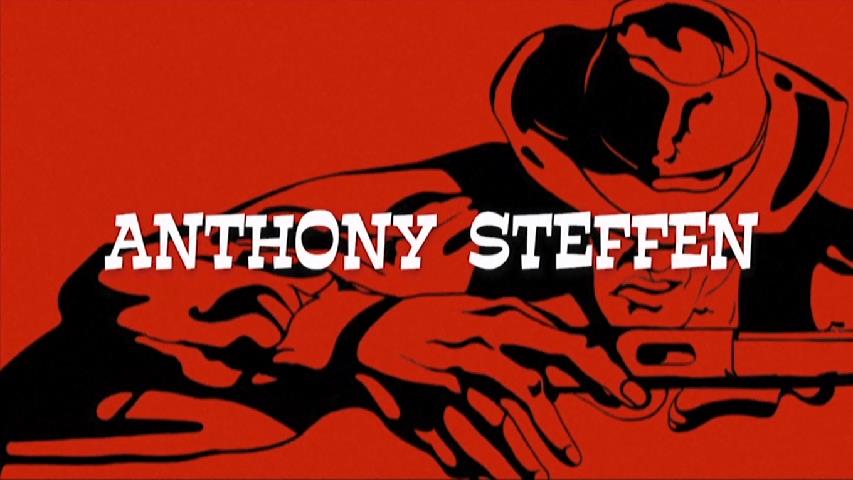 The film Ten Killers Come from Afar, was filmed in 1972, but not released until 1974. The team of director Juan Bosch and actor Anthony Steffen were paired up for Ten Killers from Afar and another comedy-western They Believed He was no Saint (Caza del oro, La), in 1972. The Spanish born Bosch is best known for his tough, no nonsense Italian westerns; And the Crows Will Dig Your Grave (Los buitres cavarán tu fosa Review), God in Heaven … Arizona on Earth and the fine giallos; The Killer Wore Gloves and The Killer with a Thousand Eyes. 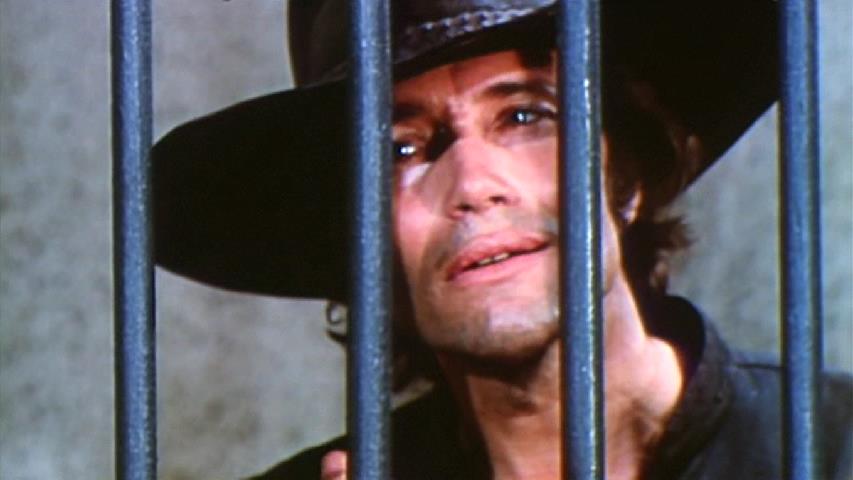 The legendary stoic actor Anthony Steffen needs no introduction here on SWDb, as he appeared in several classic of the Italian western genre, with Django the Bastard (Django il bastardo) his most recognizable oater, followed by Blood at Sundown (Perché uccidi ancora?), Seven Dollars on the Red, $1000 on the Black, A Few Dollars for Django, Man Who Cried or Revenge, Garringo, Shango and Viva Django, among many other good western and non-western genre examples. Interestingly Steffen, who is noted for his wooden style of acting, fared very well in his western genres crossovers into comedy. In 1968, he teamed up with Mark Damon in the excellent western-comedy A Train for Durango, an early showcasing of Steffen’s comedic skills. In the two 1972 Bosch comedy-westerns, Steffen plays a character only slightly removed from his vengeance seeking anti-hero, he had perfected in a string of effective westerns, same basic character, but, in a comedic setting. 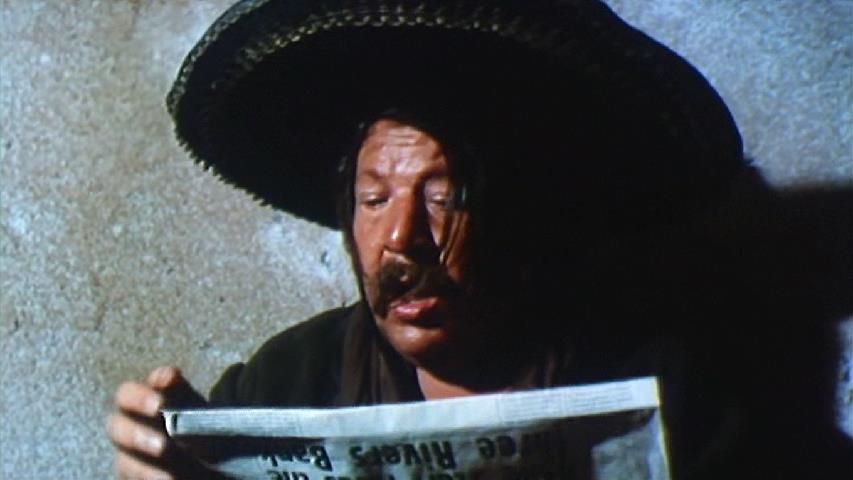 Ten Killers from Afar (aka Dallas), plot revolves around an emerald mine, it seems that Dallas (Anthony Steffen) had lost his chance at the mine, his inheritance, when his father had lost it in a poker game to a man named Kelly, who has recently died, leaving the mine to his daughter Glenda (Gillian Hillis), who is now the rightful heir. Problem is that Glenda does not know how to play poker, to fulfill a clause in the mine’s ownership that speaks of a rematch of a hand of poker to determine the new mines owner, thus thwarting the chance of Dallas reclaiming the mine. Dallas and his brother Pistachio (Fernando Sancho), are constantly at odds with one another, with Dallas using all sorts of violent physical gags against Pistachio, including dynamite twice. There are two other groups of men in Brownsville, who are also trying to get the rights to the mine from Glenda. The two warring gangs, are the Bright brothers, who are far from being bright and the town bully Handbuster (Ricardo Palacios), who, let’s just say is not a man to shake hands with, accompanied by his two tag along lackeys. The two rival gangs, who Dallas plays both sides for monetary gain, are borderline idiots and use force to try and gain an upper hand.

The thing that makes the film work is the fact that the slapstick is of the violent nature and most of the gags are very funny. For an Italian western with very little gunplay, it moves at a great clip and does not bog down or get too over the top in its stupidity. The teaming of Steffen and Sancho is a fantastic pairing and both play well off one another, with Sancho’s character being toned down from his usual flamboyance, into more of running joke. Dallas and Pistachio refer to each other as brothers, but, the point while addressed, is never clarified. At one point Dallas tells Pistachio that the old man had made mention of pistachio, saying, “My dear and only son, you and pistachio are brothers”, and then the old man died. In a scene, later in the movie Pistachio speaks of his late father, who is not the common father Dallas had referred to. The brother thing may have been a ploy to associate the film with the Trinity series, with Steffen stepping into the Terrance Hill Trinity part and Sancho, into the large shoes of the late great Bud Spencer, as Bambino! But, fortunately the movie never overly copies the Trinity films and while lifting a few ideas from other westerns here and there (Like the use of a parasol by Dallas, most famously used by Tony Anthony in The Stranger Returns), the production comes across as a fresh, albeit violent comedy-western. The music by Marcello Giombini, best known for his captivating Sabata score, is as wacky as the proceedings at times, the score consisting of electronic type compositions, that vary from amusing to grating on the nerves. 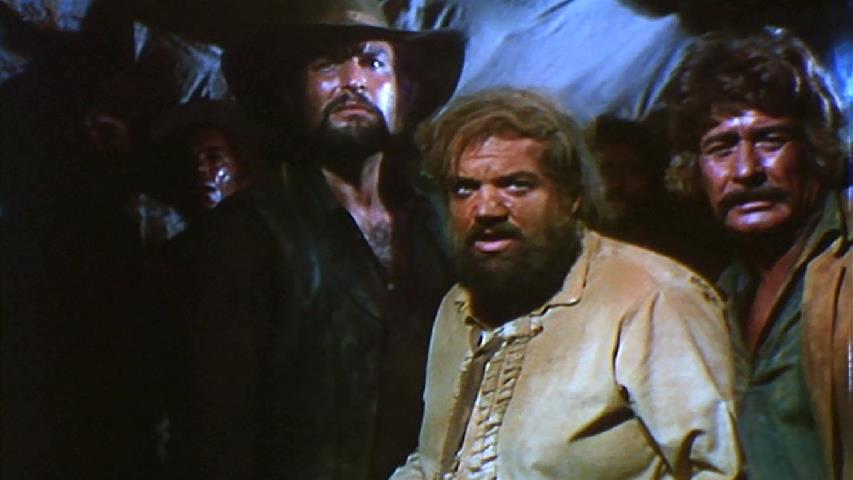 The release of this rare film on a twofer with A Few Dollars for Django, is cause for celebration. Ten Killers Come from Afar has never been afforded an official North American release, with only Spain and Brazil having released the flick on dvd. The picture and sound have a few flaws, but, takes nothing way from this very obscure English language print, that had to have been a nightmare to locate a copy of! While the other film A Few Dollars for Django, has been afforded a few foreign releases and a couple of awful quality budget releases, the print presented here is of exceptional quality. Ten Killers Come from Afar is a fun, violent western, that keeps things moving at a fast pace and never slows down long enough to lose its momentum. Not great, but a good enjoyable western-comedy, and that coming from a non-fan of that Italian comedy-westerns blendings.

Article written by Michael Hauss, author of reviews and articles for Monster magazine, We Belong Dead, Multitude of Movies, Divine Exploitation, Exploitation Retrospect, Weng's Chop and various blogs that include Multitude of Movies, Theater of Guts and the SWDb. He has a love of film with particular interest in the Spaghetti Western and Horror genres. Michael lives in the United States where he resides with his daughter and their two cats Rotten Ralph and Fatty boo-boo.
Retrieved from "https://www.spaghetti-western.net/index.php?title=Ten_Killers_Come_from_Afar_-_Wild_East_Productions&oldid=111376"
Category:
Cookies help us deliver our services. By using our services, you agree to our use of cookies.