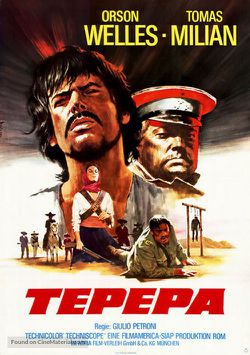 In the first part of the 19th century, in the aftermath of one of the many Mexican revolutions, an English medical doctor (Steiner) saves the life of a convicted revolutionary called Tepepa (Tomas Milian). To win the doctor for his cause, Tepepa starts explaining him why he has started a personal revolution against the ones who have betrayed the Mexican people. But unlike most other Europeans in Zapata westerns, Steiner is not an adventurer selling his professional skills, but a man with a personal mission. We discover that he holds Milian responsable for the death of his aristocratic fiancée: he has saved Tepepa's life for a special reason: he wants to kill him himself! The conflict eventually leads to a climax in which Milian is defenseless and Steiner must choose between his Hippocratic oath and his desire for revenge ...

This is one of the longest, most deliberately paced, and pessimistic films in the stream of Italian political westerns. Ideals are forgotten, friendship is betrayed, and even Milian - who remains faithful to his self-imposed mission to free the people of Mexico - can't keep his hands clean because he is unable to understand the consequences of some of his actions. In a pivotal scene he tells Steiner that he only did to the man's fiancée what any man would do to a girl. For this reason there should be no real conflict between them, the revolution being so much more important than a woman. Within the context of the Zapata western, the presentation of a revolutionary as a man unable to understand the pain inflicted upon others, indicates an icreasing tendency among Italian lef-wing writers and directors to reflect on their own political ideas. It also makes Tepepa probably the only revenge western in which the avenger is after the hero of the movie.

Written by the great Franco Solinas, who also wrote Damiani's Quién Sabe? and Sollima's The Big Gundown, the film not only reflects those fimiliar sixties sensitivities, but also refers to political developements in post-war Italy, more specifically the desillusionement among communist partisans who had fought, in the later stages of WO II, side by side with their fellow Italians against Mussolini and his black coats. After a short period of cooperation and strong feelings of togetherness, Christian-democratic leader De Gasperi formed a right-wing government that would embark on a strong pro-American (and anti-communist) course. His decision to leave the communists out of his government, was experienced by many left-wing intellectuals as betrayal, and created the typical revolutionary ardour and strong anti-clerical (anti-catholic) feelings expressed is most Zapata westerns.

Petroni's direction is rather restrained; his movie is deliberately paced, even slow, but the Leone style flashbacks are well-integrated into the story. The moody atmosphere is emphasized by Francisco Marin's beautiful widescreen photography, showing us, in sombre, grayish colours, a Mexico we have never seen before in a spaghetti western. Milian's performance is less-mannered than usual, only sparsely showing his antics. Steiner is excellent, expressing every emotion from suppressed anger to stupor. Although melancholic, sometimes even depressing, the film is not devoid of humour: in a very funny scene a blindfolded Milian, waiting for his execution, is fighting with a priest over a cross, and than there's that question, repeatedly asked to Steiner: Le gusta Mexico, señor ? (Do you like Mexico, señor ?) that eventually will lead to a final scene that is at the same time an anti-climax and a key-stone of the movie.

Apart from all this, Tepepa is memorable for two things: the film's most evil character, renegade colonel Cascorro, is played by Orson Welles, who allegedly directed his own scenes, and Tomas Milian refused for the first time to be dubbed in Italian, resulting in a cute "Spitaliano" that would contribute considerably to his popularity in Italy. More deeply rooted in Italian history than most contemporary westerns, it's no surprise the film was (and still is) more popular in Italy than abroad. Contemporary reviews were very positive and the Italian spaghetti western database calls it one of the great classics of the genre. Morricone's soundtrack is delightful, wonderful, one of his very best. You wonder how the man keeps doin' it ...