Tex and the Lord of the Deep Review 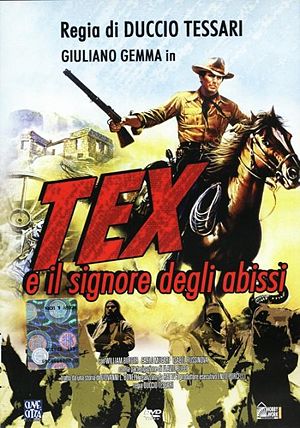 Tex Willer, a Texas Ranger living with the Navajos, is assigned to investigate a convoy robbery with his trusty partner, Kit Carson (Berger). They find the mummified corpse of one of the convoy guards. Further investigation reveals that it is the result of a secret Indian weapon harbored by a mystical Indian tribe who are planning an all out war on the whites. It's up to Tex, Kit, and their Indian friend to put a stop to the uprising.

By the 80's, the only Spaghetti Westerns released were usually some sort of exploitation film, often involving Indians (White Apache, Scalps, Arrapaho, etc). But if anything the Spaghetti flavor was mostly missing. But Tex and the Lord of the Deep is one of the only through and through Spaghetti Westerns (both look and feel) of the mid to late 80's. But unfortunatley, it received no theatrical release and was aired on Italian Televison. This was how far Spaghettis had deteriorated.

Tex, although a very fun and original film, is not without some nearly drastic problems. Among other things, it simply tries to be too many things at once. We start off thinking this is going to be some Indian western full of meaningless yet poetic speeches. (Italian westerns have the worst of these, especially in the half English-Indian speakum in). But we're soon on the Mystery trail with the trio investigating the robbery. And soon enough, they travel to some sort of Mexican castle complete with cobweb covered attic and a Moroccan philosopher of some kind!? After we leave the horror territory, we're back in proper Spaghetti country with proper action in a dust blown showdown. Now this is more like it. But the film wants to be even bigger (another problem) and we end up in a massive gunbattle with nearly an entire Indian tribe blown up, all taking place in a sort of Indiana Jones type ending, in a cave. And if you think it all sounds cool (it surely isn't, without entertainment and interest) think again. With all this going on, it is very easy to get lost in the plot. Or even interest in the film. It changes too much.

On the lighter side, the film is definitely extremely enjoyable through the mass amounts of action it contains. Tessari was never anything special in the action department, nor was he bad. Among the frequent brief gundowns and such, the prolonged gunbattle at the Ghost Town between the trio and a Mexican gang, and the finale are all very impressive. Especially the pyrotechnics. But the Indian factor does sort of slow it down whenever they are given too long a scene. I've always been ashamed of my country for the Indian genocide but I always found their inclusion in Spaghettis as kind of boring. They always seemed either too angelic or too evil (think of Black Jack). Beyond this, it's pure entertainment.

By 1985, Gemma was getting close to the top of the hill at 47. But as always, he hasn't aged except maybe darker hair. And he still maintains all his charm and athletic abilities. His role is also perfect for him. He always played the character everyone feared and respected very well I think. Especially in films like Silver Saddle, the Ringo films, and California. The only trouble is you may from time to time forget it's Gemma, as his constant use of his cowboy hat and the extended footage outside sort of mask his appearance. William Berger was over the hill by now, but he too pulls off a good performance. He too plays a character he played many times. Mostly in the Twilights like Keoma and California. I believe he subs himself too. 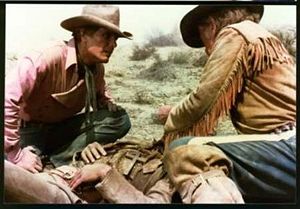 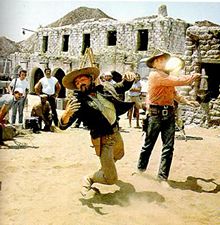 Duccio Tessari films most of the scenes very well with special attention given to his very eccentric sets (Mexican castles, Indian caves with strange glowing pits and such). And his camera work is slightly reminiscent of that of Orson Welles (in movements mostly). He films a walk talk scene through town streets in one take similar to Touch of Evil (though extremely lackng the former's flair). But any other comparison of Tessari to Welles is grossly inappropriate and the comparison here is only slight. Anywho, he is great with the action scenes and such.

Ferrio's score is nothing to write home about. Thankfully, it doesn't contain any crappy 80's music.

I'd recommend it for its entertainment value but certainly not its cinematic value. It's fun and interesting and any fan of the original Italian comic books should have a blast as well.