Tex and the Lord of the Deep Review (Scherpschutter) 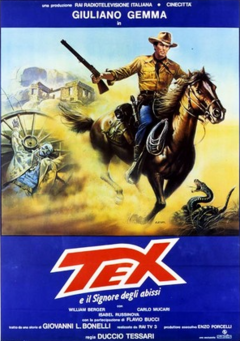 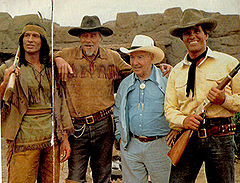 Twenty years after the Ringo movies, Giuliano Gemma and Duccio Tessari were reunited for this production, co-financed by Rai Television, and set up as a pilot for a TV series, starring Gemma as Tex Willer, the ranger from the famous fumetti (comic strips). Although set in the West, the movie wasn’t presented as a spaghetti western. Instead it was introduced to audiences as the Italian answer to Spielberg’s Indiana Jones. Both film critics and fans of the comic books despised the movie and the TV-series never came off the ground.

Tex Willer was created by author Gian Luigi Bonelli and illustrator Aurelio Galleppini. The first drawings of the character were inspired by Gary Cooper, but with the arrival of new illustrators his aspect would change over the years; many have recognized traits of other actors, such as John Wayne and (notably) Charlton Heston (1). In the first comic strips, published in 1948, Tex was an outlaw. His brother had been killed by a corrupt cattle baron and Tex had taken revenge. These first adventures presented Tex as a character with a strong sense of right and wrong, who was prepared to work outside the law to bring justice. Very soon, he becomes a ranger and thanks to a marriage with a beautiful Indian girl, he also becomes Chief of an Indian tribe, the Navajos. His closest friends are the gruffish Kit Carson and the Navajo warrior Tiger Jack. His origins as an outlaw were never completely washed out: Tex has a strong code of honour, but also a disregard for strict rules and he won’t ever show any mercy for ruthless criminals.

The movie combines elements from three different comic books, 101-103 in the series, plus a few isolated vignettes from other episodes. Tex and his two partners are asked to investigate a convoy robbery. A load of 300 guns has been stolen and Mexican bandits are suspected first, but one of the convoy guards has been mummified and a strange object, apparently of Yaqui origin, is found on the spot. The trail leads the trio deep into Mexico, where they are confronted with an Indian uprising, inspired by an alchemist parked at the bottom of a volcano - the lord of the deep from the title.

According to Marco Giusti, the film makers had assigned themselves an impossible task (2). Tex Willer is one of the most popular characters in Italian comics and fans would never accept a cinematographic version of their hero. Tex’ spiritual father Bonelli believed in the project and therefore accepted a small part in it (as the Indian narrator), but repeatedly had differences of opinion with Tessari about the direction of the film. Galleppini refused to design the film’s poster. Gemma, who had been chosen by fans of the fumetti to play the part (3), was criticized for being completely unbelievable as Tex. Even his shirt didn’t have the right colour (pink or white instead of yellow). When the film was finally shown in Venice, most people in the audience were fans of the comics, who had only bought a ticket to boo the film.

I wasn’t raised with Tex Willer and have read no more than a handful of the comics in my entire life. Watched unprejudiced, the film is remarkably enjoyable. With elements taken from several comic books, the narrative has become a bit of a hodge podge. Basically it’s an adventure movie in a western setting, but there are also elements of horror and even peplum. Not surprisingly, the western elements work best. Tessari still knows how to shoot a good western scene. Early on there are a few quick shootouts that are particularly well-staged, but gradually the affair turns into a fantasy and horror oriented movie, with little or no western action left. A shootout in a ghost town is far too protracted (and goofy), and the finale, in and around the volcano, is more about pyrotechnics and falling rocks than about bullets. Tessari is also betrayed by some awkwardly looking special effects. There’s one mummification scene that will give you the idea you’re watching a Punch & Judy show.

But Gemma is not that bad as Tex and Berger is the ideal actor to portray Kit Carson. One of the characters, Tulac, has undergone a sex-change operation and has become a woman, but luckily she’s played by the breathtakingly beautiful Isabel Russinova. It’s good to see old spaghetti western pals like Aldo Sambrell and Frank Braña, twenty years, some kilos and a lot of grey hairs later. Apart from the not-so-special effects, the film has a splendid look, thanks to Pietro Morbidelli camera work and a good use of the familiar Almeria locations. There’s a great nostalgic scene with Gemma overlooking the S-shaped gorge that appeared in dozens of spaghetti westerns. Tex and the Lord of the Deep is not a fabulous movie, but it felt good to be back in the saddle.