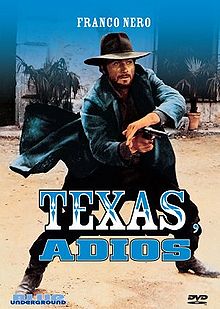 The third spaghetti western of 1966 starring Franco Nero, after Sergio Corbucci’s groundbreaking Django and Lucio Fulci’s Massacre Time. Texas Addio begins in medias res. Two men ride into the town of Widow Rock (huh?) and start shooting at each other, running through the town street, climbing on buildings, jumping from roofs etc. And all this, so it seems, simply for the joy of jumping from roofs, running through a town’s street and shooting at each other. When one of them is lying on the ground, waiting for a bullet to end his life, Nero pops up and unarms the other guy. Nero is the town’s sheriff and points out that in his town crooks are handed over to justice alive, not killed by bounty hunters. It’s a rather odd, almost surreal scene that, at first glance, seems to bear only little relation to the rest of the film, but will turn out to be a key scene, establishing the protagonist’s character.

Texas Addio is usually called a more Hollywood oriented spaghetti western. Nero is a sheriff rather than a wandering gunman, and even after he passes the sheriff’s star to his successor and goes looking for the murderer of his father (in the company of his younger brother), he primarily thinks about bringing the culprit to justice. The murderer of Nero's father, is a Mexican called Cisco Delgado, who has become a local tyrant in his home country, but the plot thickens when he turns out to be the younger brother’s father as well.

Almost immediately after the brothers have set foot on Mexican soil, they are confronted with all kinds of cruelty, such as the execution of a bunch of peons by the local alcalde, in a scene that even outdoes a similar scene in Django in sheer brutality. Once you’ve seen it, no cork will ever be the same. Trust me. Mexico is a poor country, haunted by despotism and corruption. But there’s hope for a change, thanks to a lawyer-turned-revolutionary, played by Luigi Pistilli. While the younger brother is locked up by his father (in a quite unconventional attempt to win his heart!), Nero is sent back to where he came from, but at the border his escort is attacked by the lawyer-turned-revolutionary and his men.

For the occasion Nero was reunited with producer Mario Bolognini, screenwriter Franco Rosetti and cinematographer Enzo Barboni, who had all been involved in Django. However, Sergio Corbucci was replaced by Ferdinando Baldi, a former college professor, who had given up his job to become a director. He had never done a western before, and it shows. Texas Adios starts as a straightforward revenge movie, takes a melodramatic turn halfway, and almost ends like a Zapata western. The depiction of some of the peripheral characters is quite erratic. When the alcalde, responsible for the slaughter of the peons at the beginning of the movie, shows some regrets, and sheds some crocodile tears, Nero and Pistilli decide to let him go because they think that he is, deep inside, a decent man. It’s like saying that those Nazi-bullies in Auswitsch weren’t bad guys after all.

All things considered, this is an entertaining movie, with lots of action and a high body count. Most shootouts are standard spaghetti western fare, with stuntmen falling from great heights, but the fistfights are a bit unusual with a lot of wrestling techniques on display, such as the infamous ‘backbreaker on the knee’. Nero gives a rather understated performance, close to his performance in Django. He was only 24 at the time, and like in Django, he was dubbed by a voice actor in Italian to make him sound older. The man who dubbed him, was Enrico Maria Salerno, who had also dubbed Clint Eastwood in Italian for the Dollar Trilogy. Django would turn Nero into Italy’s most popular genre actor, but at the time Texas Addio was made, No Name still served as a role model. Dell’Aqua, more a stuntman than an actor, is surprisingly good here as the younger brother, who attracts a lot of female attention. Pistilli, ‘the man you love to hate’, is cast against type as the revolutionary lawyer, and plays the part as if he has been playing such parts all his life. The score by Anton Garcia Abril is very appropriate: traditional Hollywood when Nero and Dell’Aqua are in Texas, more experimental and Latin after they have crossed the Mexican border.