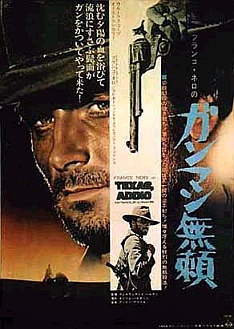 Burt Sullivan, hard nosed sheriff of a tough border town, throws in his job and travels south in search of the man who killed his father many years prior. All he knows is the man's general whereabouts and his name, Cisco Delgado. As a taciturn loner it is no surprise that Sullivan intends to travel solo but he is soon accompanied by his young brother Jim who is equally determined to find their father's killer and join in the search for revenge. On arriving in Mexico the two quickly discover that Delgado is a feared and wealthy man who rules the region with a fist of iron (not to mention a branding iron) and that there is more to be faced than their father's nemesis. The local peasants are in desperate need of help and Delgado has some information that will stop the brothers dead in their tracks.

Texas Adios was Franco Nero's third and last western of 1966 after the ground breaking Django and family fun titled Massacre Time. After these genre classics he jetted off to America to shoot the musical, Camelot of all things. Thankfully, his time in America was not over extended and he returned to europe to continue his career as the king of the spaghetti western. As such Texas Adios can be seen as the last of Nero's first wave of westerns. As his career progressed he tended to play a variety of types but in these earlier ventures he stuck strictly to the strong, silent type of hero/anti hero roles. Texas Adios is a typical example.

Burt Sullivan is a rigid, mostly moral character. His guns work only in the line of duty or strict purpose. To begin with as sheriff, later in search of revenge for his lost father and eventually in defense of the uprising townspeople who are brutalised by the evil Delgado. There is no money or bounty being sort here. No personal gain. And as such he is a less ironic or cynical character than many spaghetti hero figures. Certainly less pragmatic. For Sullivan his course is clear and his code unwavering. As such, he tends to resemble more the traditional U.S. western hero figure; standing firm in his beliefs and 'doing what a man has to do' throughout the story. Having said that, he is no 'white hat' hero. He kills ruthlessly, beats his opponents without mercy and ignores any brutality or injustice he sees that does not directly relate to his immediate mission. He even allows his brother to take a beating before taking on the attacker himself after young Jim is knocked unconscious.

Another element of 'classic' styling is in the music score from Anton Garcia Abril. A score which starts off in a very traditional U.S fashion but which shifts to much more spaghetti style as the film progresses. It appears that the mexican border acts as a stylistic as well as geographic boundary in this film. Once crossed we are in far more familiar spaghetti territory.

As a result of some of the more traditional elements Texas Adios is often considered more influenced by the american style than most spaghettis and Nero himself has admitted that this was his most classical western role. Certainly it does have a more classic feel to much of it but the regularity and excessive levels of violence on show here keeps this very much in the eurowestern camp as far as I'm concerned.

The presence of Nero is plenty enough reason for this film to feel like a proper spaghetti of course but, just to add weight to that feeling, the other cast members are firmly rooted in the genre from the old world side of the Atlantic. Jim is played by regular fresh faced youngster Alberto Dell'Acqua (under the strange pseudo of Cole Kitosch), mean man Delgado is Jose Suarez (who also starred in another spaghetti with a family melodrama twist, The Forgotten Pistolero) and the noble lawyer who leads the towns folk against Suarez is genre favourite Luigi Pistilli. Good enough for me.

But just to add a bit more to the pot, we have scene stealer Livio Lorenzon as the town's drunken and corrupt alcalde. A man so destroyed by Delgado's evil power that he drowns himself in liquor and executes the big man's opponents as if they were mice caught in a trap. His manic laughter as he watches another peasant bite the dust is gloriously over the top. As is his technique of signalling another salvo of executioner's bullets by popping the cork on his liquor flask. All this followed by his defiant statement of "That is how I do things!" Brilliant. Fernando Sancho himself would have been proud!

It would be easy to scan the previous few paragraphs and dismiss Texas Adios as just another mindless revenge flick with cardboard cut out characters and no challenges whatsoever, but that would be a rash and unfair categorisation. Certainly, the film follows a certain predictable line to a large extent but, despite their cartoonish exterior, its characters have some surprising depths which makes the whole thing a lot more enjoyable. In particular the darker characters are exposed as having far more human facets than is first evident. The alcalde, for example, for all his brutish mugging and heartless bloodletting is ultimately shown to be a victim himself. A defeated shell of a previously moral man rather than a wholly wicked one. Likewise, Delgado, although personifying self centred evil thoughout the film also has his more complex side exposed; showing a human being oscillating between defiance and shame for his own behaviour. A man who, despite his litany of sins, still craves the love and respect of a son.

But before we get too carried away with sentimentality we shouldn't lose sight of the fact that this is a shoot 'em up western at heart and there is plenty of punch ups, gunfights and horses collapsing under ambush fire to keep us all happy. Nero carries the lead well as usual and although this wouldn't be the greatest film he ever appeared in it will pass a pleasurable hour and a half for anyone with a taste for westerns with a pasta edge to them. I certainly enjoyed it. But then I'm easier than a one coloured rubic's cube in such matters.

Footnote: If you can, I would advise watching this film in italian with english subtitles. (both available on the Blue Underground DVD) The english dub voice for Nero's character really doesn't do him justice.