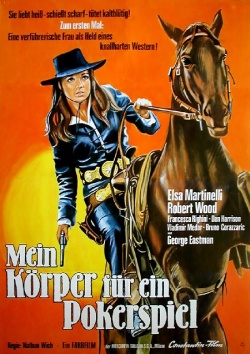 The Belle Starr Story (1968) is, to my knowledge, the only Spaghetti Western ever directed by a woman, Lina Wertmüller. She would go on to be the first female and the only director of a Pasta Western to be nominated for an Academy Award for Best Direction, for "Seven Beauties" (1976). These odd facts may somewhat overshadow this frankly bizarre movie that should probably be seen by fans so they can say at least "I've seen it!”. This isn’t a bad film per se, but it’s not in the league of Leone, Corbucci or Sollima. But it deserves to be known more widely than it is, for some well-stage action scenes and seeing the ever reliable Robert Woods.

The screenplay by Piero Cristofani is merely passable, even redolent of American B-Westerns of the nineteen-forties: Belle Starr (Elsa Martinelli) meets Larry Blackie (George Eastman) during a card game, commencing a love/hate relationship coming to a head when both try to steal a diamond shipment from right underneath the noses of the Pinkertons, with the two working against each other. These plot mechanics play second fiddle to the strange, slightly perverse relationship between Belle Starr and Larry Blackie. The attempts at a love story fail, simply because, and this is probably the scriptwriters fault, Blackie is pretty unpleasant for most of the time. The meeting “cute” scene, a hallmark of many a romantic comedy, is so downright misogynistic that it is surprising that Wertmüller actually directed this; but sexual politics were different in the sixties, so who knows, maybe this wasn’t as strange as it is for modern audiences.

The middle of the film is taken up by long flashbacks to Belle Starr's past, which feature the dependable Robert Woods. He was originally going to have more screen time, but tensions obviously flared between Woods and director Wertmüller, so his role was dramatically shortened. The flashbacks are good scenes, with a well directed gunfight in a wood, but they seriously unbalance the film and put the pacing right off. The dialogue too, sometimes feels like it came from a first draft as opposed to a revised script. The acting is mostly solid, with Bruno Corazzari doing wonders in his small role. Cinematography and editing are uninspired, giving the impression no one was terribly enthusiastic about the picture. You might be keen to see the movie because of who directed it, well be forewarned: there are few hints to coming glories here. In fact most of the good parts come from actors managing to draw out the occasional rough pearl from the screenplay and making sure it gets caught on camera. Maybe I’m being too harsh with this picture: after all, a movie with some good acting and a one or two exciting shootouts can’t be all that bad. Perhaps my negative reaction is in response to wanting this to be better than it is: with that cast and director, it should have been a semi-classic.

Over all, however, it’s an interesting oddity in the harsh desert of Spaghetti Westerns that aficionado's will want to watch, probably for a variety of reasons: Robert Woods or Lina Wertmüller fans, Spaghetti Western addicts and those curious to see a movie that comes from the backwaters of the genre.