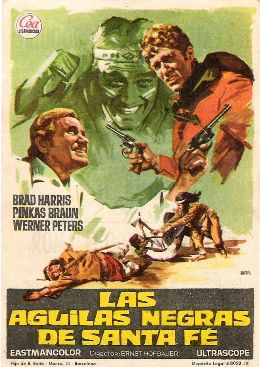 The film opens with a bloody Indian attack on a western town; many people are killed, the survivors seek refuge in the nearby Cavalry Fort. Brad Harris is an undercover agent called McPherson, who's asked by the commander of the fort to investigate why the Indians have broken the peace treaty and are on the warpath. He soon discovers that the Indian uprising was masterminded by the evil rancher Morton, who's after the oil discovered under the reservation grounds. McPherson is a friend of Comanche chief Black Eagle, and therefore the only one who may be able to prevent a massacre.

The Black Eagle of Santa Fe was released in 1965 but Italian actor Luciano Stella (Tony Kendall) has always sustained that he was offered the role of No Name in A Fistful of Dollars after Leone had seen him in this movie. Black Eagle was part of a loose trilogy, along with River Pirates of the Mississippi (1963) and Massacre at Marble City (1964). Kendall/Stella was also in the first movie and it seems more plausible that Leone saw him in that one. If Leone watched parts of the trilogy, Kendall wasn't his biggest catch: the most remarkable face in Black Eagle is that of Austrian actor Josef Egger, who also appeared in the second movie, and would become a legend (not to say a Prophet) thanks to Leone and the Dollar movies.

With a story of a corrupt white man stirring up the Indians in order to provoke a war, the film clearly follows the model of the Winnetou series. It's a bit more violent and the heroes are also a bit more cynical than the romantic heroes from the Karl May stories, but it all remains rather harmless. The girls (one blond, one dark) are cute and very honorable, and the ending - the Indians coming to the rescue (in true cavalry style!) of those who are under the attack of Morton's men - is completely in the spirit of Karl May. The outdoor scenes were shot in Almeria and - according to a certain Jan Švábenický (1) - in former Czechoslovakia, on grasslands just outside Prague. Brad Harris and Czech actress Schoberova fell in love on the set and would soon officially get married. Horst Frank plays a good guy for once, a newspaper reporter who has some vital information on the incident which led to the hostilities. The score, by Gert Wilden, is unremarkable but there's a nice musical interlude with German singer Ronny performing Kenn ein Land on the premises of Fort Eagle Rock. The movie's title is a bit odd: as said the Indian chief is called Black Eagle but he's definitely not from Santa Fe (2). 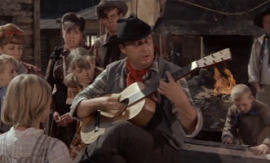 German Schlager Sänger Ronny was born in 1930 as Wolfgang Roloff in Bremen. In 1964 he had a smash hit with a German version of My Darling Clementine. His second N°1 hit was Kleine Annabel. He had a great voice, but unlike Freddy Quinn and Peter Alexander (who also appeared in western movies) he was not a great showman. His star faded, but he remained in showbizz, mainly as a producer. He discovered the Dutch child singer Heintje and wrote several hit songs for him.

The song performed in Black Eagle, Kenn ein Land (I know a Country), was not written for the movie; it's a charming little song about a man who was forced to leave his home ground and the girl he loves, because he had shot a former friend - who also was in love with the girl - in a duel. I know a country, somewhere, where the sun always shines. I know a girl who loves me very much, but I can't be with her.

Retrieved from "https://www.spaghetti-western.net/index.php?title=The_Black_Eagle_of_Santa_Fe_Review&oldid=113508"
Categories:
Cookies help us deliver our services. By using our services, you agree to our use of cookies.