The Boldest Job in the West Review 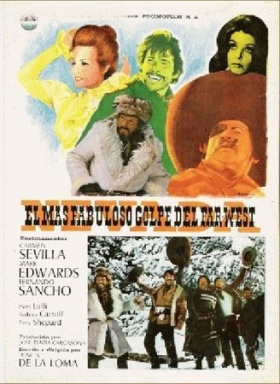 A gang of outlaws band together under the leadership of Michigan, a smooth talking gunman for a very ..... bold job. The job? Bank Robbery of course. Each member is assigned a specific job. Distractions, suspense, and family feuds(?) ensue and in the aftermath, it gets even uglier.

If there ever was a Hidden Gem in the Spaghetti Western genre, this would be my pick for the definitive hidden gem. The film is largely unknown and sparsely available. The most known source is an English language Finnish VHS with hard coded subs. How could a film like this remain so unknown? Well, it's a tough one but most likely the low budget (very well concealed), late filming period, and the production.

This film is one of the snowbound westerns, similar in look (and atmosphere) to films like The Great Silence and especially Cut throats Nine (minus the gore). It is bleak and very dark. And above all, excellently paced and structured (most important aspects for me). The film is split into two halves. The first half is the robbery sequence pulled off in a very no bullshit tone. But it seems that Loma thinks it's getting boring when it isn't, as he inserts some needless and distracting (yet irresistibly entertaining, Jerry Springer style) sibling rivalry. Charly Bravo's character is in love with two women. They just happen to be two sisters. It's obviously inserted into the fray but isn't swept aside and is dealt with in a detailed manner. My problem with it is that it feels too thrown in and has no relation to the real plot. But for the most part, the first half is a suspenseful and visually interesting Heist film, set in a mud strewn town that fits well with the bleak atmosphere and the realistic snowy West.

The second half is the usual double-cross story. But done with more emphasis on realism and suspense than most double-cross Spaghettis, well, maybe not realism. The group find out their two gold carriers have been killed in a very suspicious manner. It becomes obvious it was one of the group who did this. For the rest of the film, the suspense becomes very high and it starts to become a Thriller. The pace slowly becomes faster and faster after one of the group turns up dead. Until now, Loma has left the gun-play to a minimal. But once he picks up the pace, there's lots of good dynamite action and shoot outs. And while the first half was set in the town, the second is set in the snowy wilderness. This second half is even better than the first but I have a few reservations. One, the group member who turns up dead is a major character, and his death is much too sudden. And sort of confused me. One thing leads to another much too quickly and soon it ruins the surprise reveal. But the finale has a strong dose of action and an extremely high dose of irony which I can't spoil.

On a whole, this strong mix of suspenseful slow pacing, well placed action, and wonderful character interplay and development more than make up for any of the film's obvious weaknesses. The two halved structure works well and keeps things interesting. And even if this film is more Paella than Spaghetti, it still has that classic feel with lots of recognizable faces and great Euro-Western action.

The actors all put on a fine show. This film should be famous as it is Fernando Sancho who takes the lead role. At first he doesn't seem like he's going to be the anti-hero, there are a lot of characters after all. We're thinking it's Mark Edwards but it is indeed Sancho and he puts on a fine show as a remorseless bandido with a heart. Charly Bravo is perfect as the treacherous outlaw and adulterer who pits the two sisters against each other. Full of oily charm and reptilian evil.

Stelvio Cipriani's suspenseful score is great and was reused to great affect in the Spaghetti themed video game, Red Dead Revolver. It has a wonderful building tone and fits the film very well even if the vocal version isn't so great.

If you get a chance to see it, I'm sure you don't need me to plainly tell you to see it as the review speaks for itself. See it and be entertained and engaged.