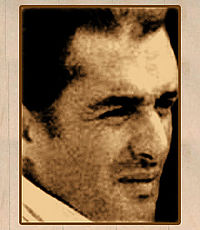 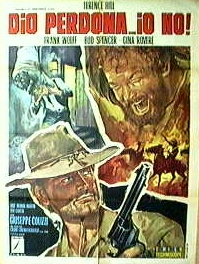 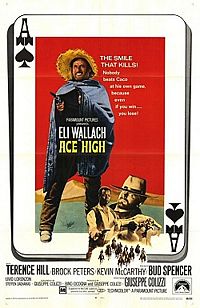 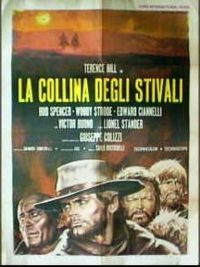 These films form one of the most critically controversial and varying of all Spaghetti trilogies. But the trilogy has a large claim to fame as the first three pairings of the now famous Italian acting duo, Terence Hill and Bud Spencer. The Colizzi trilogy is something of a mixed bag. The strengths are numerous but the flaws are crippling. But there is no denying that this trilogy is heavy on style and atmosphere. And with all this, this makes the trilogy one of the most famous in Italian Western history.

Giuseppe Collizzi directed these three films at the height of the Spaghetti boom. They are God Forgives, I Don't (1967), Ace High (1968), and Boot Hill (1969). The first film is widely praised in the Spaghetti community while some criticize its leisurely pacing. Ace High is far more divided than the first. Many like the mixture of slow pacing halted by the climatic and impressively staged battle in the middle. As well as the introduction of Circus Acrobats and heists. But Boot Hill is known as one of the worst Spaghetti Westerns. Most hate the film for its over emphasis on Circus life and lack of focus on the main heroes. It has also been accused of homosexual references. But all these films do have many strengths. #1 is heavy on style close to that of a Film Noir heist tale. Ace High keeps this crime film feel but the darkness of a Noir is dropped and swapped for Acrobatics. Boot Hill's main strength lies in its interesting departure from the norm in a Spaghetti Western by introducing a full circus and using clowns and acrobats in gunfights. The Noir suspense is back but is quite overshadowed by the lighter circus elements. But what truly kills the film is the lifeless, out of place, and boring political elements about miners being forced out of their land.

One major aspect of these films is Collizzi's use of the desert landscape of Southern Spain. While most directors use it as a Southwestern America look-alike, Collizzi's photography uses the desert to its fullest. The look of the characters and their costumes as well as the brown tinted shades of the film's color, fully draws out the heat and uncomfortableness of the desolate landscape. The make-up mixes dirt washed away with mass amounts of sweat. Putting you right into the blaze with the characters. Making you feel their suffering even more.

Almost all three of the Collizzi films have at least two major settings. Mexican pueblos and high class gambling houses. Collizzi uses the layout of both the interiors and exteriors of the villages to great affect. And the quietness of the white clothed peasants adds suspense when needed. And their convincing costuming gives Collizzi the last ingredients for him to successfully create his own image of Mexico. But there is also a large amount of runtime set in smoke swathed casinos. He doesn't just film in the main rooms with nicely dressed gamblers or imaginationless bedrooms. But also films in the kitchens, store rooms and attics. Giving us a full tour of the layout and atmosphere of a true gambling house. And finally, as time increased, Collizzii's interest in the circus grew. So he set his third western almost entirely in and around the circus tents. Which look all too much like a Roman set.

One odd aspect I find is the time period of these three films. By looking at the props and such, I'd say it's as good a guess as any to say these films were set in the 1860's. Collizzi's pistols are all Navy Colts. Only one Peacemaker is seen in any of the films and only for half a second. But there is no mention of the Civil War, but in Ace High, the three main characters fight in a battle between two Mexican armed forces, most likely during the French Intervention when some Mexicans fought for the French. But I just find it interesting that all the pistols are of this type. None of the main characters use rifles either.

Giusseppe shows a great interest in gambling. He films many poker games or other games of chance with a great sense of style. He puts effort into lighting them just right. Shining his main light on the table while obscuring the players faces in dark blue. The climax of Ace High is set in a Casino with the gunmen scamming a corrupt gambler out of his ill-gotten loot. He portrays gambling as a dangerous proposition. And the loser may pay with his life.

The villains in these films on a whole are rather odd when it comes to film villainy. God Forgives.. has a very strong portrayal of a villain but both Ace High and Boot Hill have some of the most non-threatening and weakest villains in the whole genre. In these films, there is no big duel, at least not that kills the villain, as he is often just arrested like in B westerns of the 30's. And thus, it makes these films somewhat anti-climactic in that regard.

In all three Collizzi films, there are either references to Black culture or Black characters. This was around the time of the Civil Rights movement and it was possible Collizzi was trying the say something. But he never articulated it if he had some point to make. #1 features a funeral with a band of jazz players (all African American) playing a lively New Orleansy tune. Ace High cast Brock Peters as a good natured gunfighting acrobat. But his character seems very thrown in. And is never really fleshed out. Boot Hill saw Woody Strode in a similar role as a former gunfighter turned acrobat. This is an interesting addition to the trilogy and adds a little spice.

Collizzi had lots of fun using the Circus in these westerns. They add an interesting flavor but he overemphasized their inclusion. He was smart with this inclusion though. It enabled him to spice up the gunfights with many tricks. Knife throwing, leaps, swings, and acrobatics in general. Even including midget clowns taking on big henchmen. Boot Hill has the most Circus flavor of all. #1 doesn't have any Circus at all. The transition from poker to circus happened in Ace High. He still kept his game but he overall, lightened up his films. In the beginning of Ace High, during a brawl, a marching band marches through town with the leader striking the participants heads with his baton. While still keeping in rank. Ace also showed the circus at the least believable times. During the climatic battle in the midsection, Hill is shot into the air by a see-saw. And the finale has Hill, Spencer, Peters, and Eli Wallach breaking into a gambling hall with a swing and rope. Boot Hill, as I said, was literally taken over by these aspects. The opening scene is a jazzy saloon gambling montage which abruptly turns into a dance-off set to Circus tunes. Almost the entire score is Circus music.

Collizzi sures knows how to create a good character. #1 (God forgives), has one of Spaghetti Western's best villains. Played by a red haired Frank Wolff. But Collizzi really excelled with supporting characters and sidekick types. Eli Wallach was cast as Greek gunfighter Cacopalous in Ace High. He got top billing mostly due to his star power and entertaining character. Lionel Stander is the main cast member in Boot Hill graced by Collizzi's scriptwriting attention. As is George Eastman to a small extent as a deaf mute gunslinger named "Baby Doll"! But Giussepe's main failing in characters is the main characters of Terence Hill and Bud Spencer. Hill is deadpan beyond belief and borders on extreme irritation in that regard. Spencer is just too grumpy and downbeat for his own good.

All three films have the same or similar style or atmosphere. Or at least the atmosphere is a result of the extreme stylization of the films. The have a jazzy, cool, heist/crime/Film Noir type feeling which sets these apart. Though they aren't as dark as Noir. They alos at times have some very entrancing moments due to the interesting dialogue and dream like music that sounds as if it deliberatley luling you to sleep. Suspenseis also key for the atmosphere/style. Rustichelli's scores emphasize the suspense to great effect in these scenes.

These three films all have a simlarity in their slow pacing. Collizzi fills most of the time up with his preoccupation with style. But he does a great job at keeping your attention as it seems he doesn't stay in one place long. He constantly changes locations and always keeps the camera work interesting. He defintely knows how to end the films, as all three have very satisfying finales. God forgives.. is the slowest paced film as well as the most stylish and he ends it with a great duel with an extreme twist. Ace High ends with a gambling sting and a (poorman's) Leonesque settling of accounts duel. Boot Hill is boring in many places but is the only one to end with the climatic gunbattle. It works good with the film and is well executed and built up with the Collizzi suspense.

The trilogy was scored entirely by Carlo Rustichelli. In all three, he scores with sweeping, dreamlike violins and strings. He also uses organs and brass. His score for Boot Hill is one of the oddest Spaghetti Western scores. It is a mixture of loose jazz and circus music. But it also has a triumphant American Western tune it calls its main theme. The scores are all fitting and well timed and add much to the atmosphere.

It is difficult to sum up a body of work such as this, but I should say that despite seemingly positive remarks, beware that both Ace High and Boot Hill are very flawed films. Though as a whole, these three show flashes of both brilliance and uniqueness. A great and much appreciated addition to the genre.

Retrieved from "https://www.spaghetti-western.net/index.php?title=The_Colizzi_Trilogy&oldid=129810"
Category:
Cookies help us deliver our services. By using our services, you agree to our use of cookies.