Il Pistolero dell'Ave Maria was made in 1969 when the spaghetti western genre was still very popular, but definitely starting to show signs of wear. The old formulas being worn out, new ones had to be found. While some directors decided to add a derisory element to the genre, others tried to create a more ˜'adult' variation by reshaping classical revenge stories. Johnny Hamlet (Quella sporca storia nel west/1968) was an adaptation of Shakespeare's 'dirty' story Hamlet, The Forgotten Pistolero is a retelling of the Greek legend of Orestes, son of Agamemnon and Clytemnestra, who avenges the murder of his father with the help of his friend and former mentor Pylades and his sister Electra.

In Ferdinando Baldi's movie, Orestes is called Sebastian, and has become a young man living on his own. One day a wounded stranger called Rafael takes shelter in his house and tells him that he is an old friend and that Sebastian is the son of the Mexican general Carrasco, who was murdered years ago by his wife Anna and her lover Thomas when he came back from a military campaign. Sebastian was able to escape with the help of a servant, while his sister Isabella was later forced to marry a man she didn't love and remained a virgin. Her true love was Rafael, who was chased and castrated (!) by the scum working for the murderous couple. Sebastian has no recollection of the massacre, but the tolling of the bells announcing the Ave Maria bring back fragmented memories, so he starts following Rafael in order to reconstruct his own past. After all these years Rafael is still persecuted by men who work for Anna and Thomas, and at several occasions Sebastian must save his life. Finally Sebastian is re-united with Isabella and together they avenge the murder of their father.

Like Johnny Hamlet, The Forgotten Pistolero wasn't very popular when first released. Today the movie has a fervent cult following and according to Tom Betts it's one of those nearly forgotten gems of the genre that every fan should check out, along with Massimo Dallamano's Bandidos (1967). At the same time the film is rejected by some for its over-complicated and melodramatic story-line. Gianfranco Casadio talks about it as una storia con molto melodramma e poco western (a story with much melodrama and few western ingredients).

Five people contributed to the script, among them director Ferdinando Baldi (a former college professor) and Vincenzo Cerami, who would later collaborate with Roberto Benigni. The legend of Orestes has inspired all three great Greek tragedians Aeschylos, Sophocles and Euripides. The most elaborated version we know, is Aeschylos' trilogy Oresteia. The movie's script more or less retells, in western form, the first two parts of the trilogy, dealing with the murder of the father and the vengeance by the son. The third part, about Orestes' penance, is left aside. However, some elements are taken from Euripides (1), while others have been changed completely, not always to good purpose (2). The biggest problem was posed by the revenge theme. In the classic Greek sense, revenge was not motivated by hate, but duty. Duty to the family, to the community, to the Gods. When Orestes is hesitating to kill his own mother, he is told by the God Apollo that it is the right thing to do. As a Greek Orestes was bound by duty to act like he did, it was up to the Gods to decide whether his action was right or wrong. The scriptwriters seem to have rendered Orestes' hesitations by making him an amnesiac, who slowly becomes aware of his mission (and fate). Clytemnestra kills her husband Agamemnon for his sacrifice of their daughter Iphgenia to the goddess Artemis; in the movie Anna acts out of pure lust, which robs her from any 'reasonable' motivation for her crime. Still she develops strong feelings of remorse and is redeemed in the final scene with the children (3). 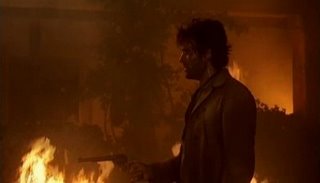 Ferdinando Baldi was one of the more prolific and versatile directors of spaghetti westerns. Il pistolero dell'Ave Maria is his best film. It may be a bit confusing from time to time, with a storyline that seems over-complicated for a spaghetti western, but patient and attentive viewers are rewarded. With only few scenes shot on location in Almeria, and some others in the Lazio hills around Rome, the movie often looks static, almost theatrical, but the action scenes are glorious. The massacre after the general's homecoming is of a terrifying beauty and the fiery finale is a genre highlight, to be watched over and over again. Some of the more subtle shots are equally (or even more) powerful: the camera lingering over Leonard Mann's bony face, zooming in on one eye, Peter Martell's suppressed anger when a prostitute proposes him to have intercourse ... The final scene, involving Mann, Velasquez and Paluzzi, is so emotional that many people who have written about it, have confessed that they were moved to tears. The cast lacks any big name, still performances are excellent. Italo-american actor Mann (his Italian name is Manzella) was contracted by producer Bolognini for his great 'spaghetti western' face; Baldi wasn't very fond of him (probably because he had written the part with Franco Nero in mind) but he gives a magnificent, restrained performance. Peter Martel's is equally effective as the poor Rafael and Paluzzi and Mendoza are entirely convincing as the evil couple with an uneasy relationship. Velasquez is breathtakingly beautiful, but she is, admittedly, not a great actress. Still, as already indicated, her final scene with Paluzzi and Mann is touching. Despite all this, the film is probably best known for Roberto Progadio's awesome score. With its main theme often used in commercials, it is among the spaghetti western scores people are most familiar with. The whistling theme is so catching that after a while you just can't keep yourself from whistling along, even if you're a lousy whistler like me. This is one of the best, if not the best, non-Morricone score for any spaghetti western.

Reviewed DVD: Marketing (Germany). The DVD has good image quality, although it's a little on the dark side. The German 5.1 surround track is a fake and not very pleasing to the ear, but luckily there are also three 2.0 mono tracks in German, Italian and English that have crystal clear dialogue and are largely free of hiss. It is said to be uncut, but in reality a few scenes are missing. The cuts seem to apply to two scenes involving Piero Lulli, and an inconsequential flashback, preceding the end credits, with De Mendoza witnessing an enigmatic murder (not previously shown in the movie), apparently inserted to give him some motivation for his persistent ugly behaviour.

Retrieved from "https://www.spaghetti-western.net/index.php?title=The_Forgotten_Pistolero_Review&oldid=123882"
Category:
Cookies help us deliver our services. By using our services, you agree to our use of cookies.