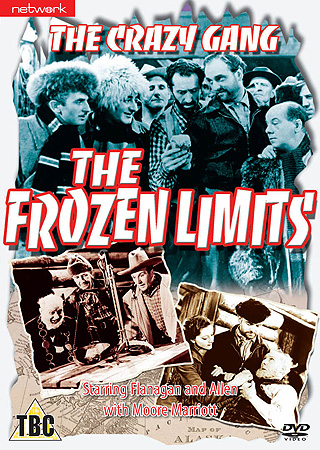 'The Crazy Gang' were quite possibly the best loved bunch of pensioners ever to tramp the boards, sing a song or raise a laugh. A pair of slapstick artists, an acrobatic high-wire act and a couple of comics who laced their jokes with schmaltzy songs, together with a red-nosed juggler became an unlikely comedy phenomenon when they first came together in 1931, and continued to top the bill for over 30 years.

The Six Wonder Boys troupe set off to seek their fortunes in Alaska after reading of a gold rush in a newspaper. On arrival at Red Gulch, however, they find that the paper was 40 years old! The town is now poverty stricken, so the boys concoct a plan to start a new gold rush, which is highly successful until their ruse is discovered. When the local villain becomes interested in them, the situation becomes even more complicated!

Featuring The Crazy Gang at the height of their fame, The Frozen Limits is arguably their best film, with the continuous barrage of humour and antics for which they were rightly famous.