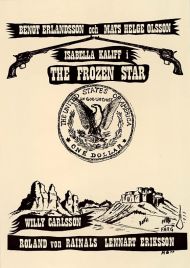 Gunslinger Bart dominates a small village. Willy wanders into town and falls in love with prostitute Rose. Bart chases Willy out of town but he returns with a group of men and settles the bill with Bart and his gang in a saloon gunfight.

Filmed in 1974 but released 1977. Rumour has it that the only print of this film got burned.

Filming took place between February 16 and April 3, 1974, at the still existing High Chaparral Wild West Theme Park in Hillerstorp, Sweden. The film premiered on March 7, 1977, at the cinema Matropol in Värnamo and bombed. Värnamo News reviewer Bengt Rydsjö wrote "Those who paid to see the film can only complain". The film was then shown in Bredaryd and for the third and final screening in Svenljunga to only two paying guests.

Among the film's highlights are a sign stating "Tourist rides", several shot cowboys unable to remain still as corpses and, towards the end, a horse that is seen grazing for several minutes while the end credits are running very slow. This was because the film had to be at least 73 minutes long in order to be considered a feature film. The fact that it was shown at cinemas at all was due to the fact that it had received production support from stately film funds.

Värnamo News: "The plot, if one can speak of such a thing here, is a tug of war between the hero and the villain about the good looking girl at the saloon. The film consists of eternally long rides in the Småland pine forests and endless gun duels. The technical side is also very poor. Long stretches of the film are barely recognisable due to poor development. In addition, the film was dubbed and speech and mouth movements don't match”.

Aftonbladet: "The world's worst film has had its premiere - it will never be shown outside of Småland".