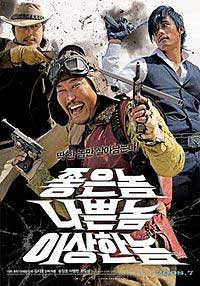 The spaghetti western may more or less be a thing of the past, but interestingly enough, its influence has been showing up in Asian cinema recently, with 2007's Sukiyaki Western Django, by Takashi Miike, and now Korean filmmaker Kim Ji-woon has given us The Good, The Bad, The Weird, a film that, as of this writing, is getting excellent critical reception at numerous film festivals around the world. TGTBTW is not a remake of Leone's The Good, The Bad and The Ugly, yet it follows a similar plot and most certainly pays homage to the Dollars trilogy. This "kimchee" western, made for 17 million dollars, is the most expensive South Korean film made to date, and stars three of the biggest names in South Korean cinema, Song Kang Ho, Lee Byung-hun, anf Jung Woo-sung.